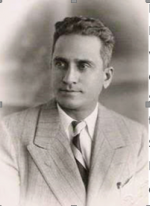 Fidahoussen was the second son of Marhum Mamodaly Cassam Chenai. He was born in 1908 in Diego Suarez. He obtained his primary education in Diego Suarez and Majunga. In 1924 he joined the family business. In 1928 he married Serbanou daughter of Kassam Virjee of Majunga. They had two sons and three daughters; Goulsanaly, Mazaher (passed away at the age of 6), Jarbanou, Narguisse Khatoun and Parvisebanou. After the passing away of Serbanou, he married Michelle Lapierre in 1958 with whom he had one daughter Yasmina.

He was personally managing the oil and soap factories established by the family. Apart from business, he was an essential part of public service. He was in the Chamber of Commerce for ten continuous years. He was an active participant in Federation Sports. He was honored for his service and was given gold award for his service.

He has been a member of the town council since 1942. Due to his public service he was awarded by the French Government a medal Chevalier du Mérite Agricole by Mayor of Paris. He has been to Europe on five business trips to date.

His father was a Jamaat trustee and after his death, Fidahoussen bhai was been appointed as Trustee of the Jamaat.