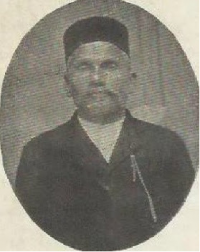 My grandfather Marhum Haji Suleman Walji was originally from Jamwadi, Jamnagar, India. He arrived in Kilwa around 1900 from India. My father Mohamedali Suleman was born in Kilwa in 1901. At Kilwa, my grandfather converted from Ismail to Ithnaasheri. He, together with some colleagues, held a question-answer session with His Highness the Aga Khan III and a book was published with the title “Questions and Answers at Kilwa.” (This incident happened in Kilwa in 1905 in a ship off Kilwa harbour. His colleagues were Nurmohamed Sheriff Manekia and Suleman Bhimji)

My grandfather and father left for Hajj in 1914. They lived in different places in East Africa and had also worked for the famous company of Nasser Virji. In 1922, they left for India where my father got married. They then decided to stay in Dar es Salaam. In 1926, they moved to Kigoma where I was born in the same year. In 1928, we moved to Belgian Congo. My grandfather opened a shop in Albertville and my father in Moba. Due to the sudden death of my grandfather in 1930 of a heart-attack, my father closed his shop in Moba and moved to Albertsville. At that time Albertsville had 4 Ithna-asheri families. These included business entities from Tanganyika, namely Alibhai Panju & Sons, Ebrahim Haji & Bros, Juma Haji of Dar es Salaam, and Kermalli Pirbhai. There were also 7-8 other Indian families making a total Indian population of 100. We had an Indian Public School which lasted up to 1938 with frequent closures due to low student population. I studied at this school.

In 1952, my father died of heart attack and the full responsibility of running the business fell on my shoulders. This business is now run under the name of R M Suleman. I got married in Dar es Salaam in 1952. Currently we have 6 Ithna-asheri families numbering 30 people. There are 6 Ismaili and 2 Hindu families and the total Indian population is 80. There are 1500 Europeans and 32,000 Africans. Albertville is among main cities of Congo. We have headquarters of CFL Railway and also Steam Navigation Company. There is a textile mill with a variety of products. Due to high coal output, there are plans being developed to obtain fuel from coal. There exist political and economic challenges.

The information provided by: Br Rajabali Mohamedali Suleman in 1960

THE FEDERATION OF KSI JAMAATS OF AFRICA,DAR ES SALAAM