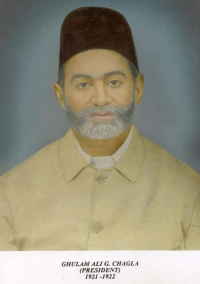 Seth Ghulam Ali Chagla, the first Muslim president of Karachi Municipality, was born in 1871 in Kharudar Karachi, a famous Khwaja family of Sindh, called Chaglo (Chalo), the beloved person in Sindhi, the father of Seth Ghulam Ali Chagla, Ghulam Hussain Chagla was also a rich person from Karachi and supported Hassan Ali Afandi in 1885 to make Sindh. Madrasut Islam in Karachi and became a member of the first managing committee of Sindh Madrast Islam. Similarly Ghulam Ali Chagla was also a member of Sindh Madrast Islam Board. He was a member of the standing committee. Seth Ghulam Ali Chagla specialized in Sindhi and English as well as Persian Urdu Arabic languages. He also made a magazine Sukhri in Sindhi and Gujarati languages. Seth Ghulam Ali Khawaja in Karachi city in 1887 Chagla Dtu Khawaju (Challo kẖwạjw The passenger house was built in which the passengers coming from other areas of Sindh and the students of Isna Ashra Khwaja were to be given residence. That passenger house is still in its real condition.

Ghulam Ali Chagla had four sons Ahmad Ali, Abdul Rahim, Hussain, Ali Muhammad and four daughters. His son Ahmad Ali Chagla was a famous literary personality and musician of the Sindhi language who also produced the tune of the national anthem of Pakistan.

Reference: The book of Karachi is an imperishable character, Gul Hassan Kalmati