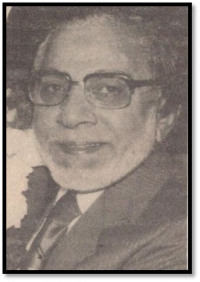 Alhaj Nurmohammed Alibhai Walji is also founding father of Hyderi Imambargha in the U.K. He was born in India (Bombay) in 1925. His family migrated to Mozambique when he was very young and he grew up in the East African environment. After spending some years in Mozambique, his family moved to Dar-es-Salaam. Nurmohammed bhai comes from a family of devoted community workers. His father, Marhoom Alibhai Walji served as Mukhi of Dar es Salaam Jamaat and in following the family tradition; he took keen interest in the community and became a Trustee of the Jamaat in Dar es Salaam.

Nurmohammed bhai migrated with his family to the U.K. in 1976 and settled in South London. He had keen interest in the local community affairs and became a Trustee of London Jamaat and Executive Member of Idara-e-Jafferia. He regularly attended functions at Hammersmith Imambargha in whatever weather conditions prevailed. He was however convinced of the need of local centers and was a prime mover of the establishment of Hyderi Imambargha.

When he became the Vice President of London Jamaat in 1986, his focus got immediately to the task of improving the usage of Hyderi Imambargha turning it into a lively centre. Sadly a few months later he suffered a heart attack and passed away. He was the first person in London Jamaat to die in office. His death deprived London of an experienced and committed leadership. Marhoom has left a large family behind who have similar compassion towards the community as their father. May Allah bless his soul, Ameen.