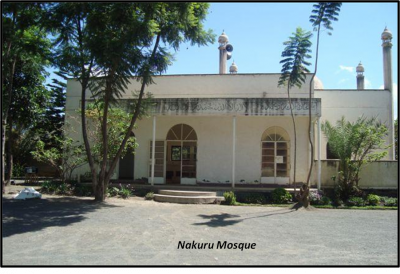 The first Khoja settlers arrived in Nakuru, Kenya in 1936. Marhum Anverali Datoo while travelling with his family to Mombasa from Kampala was very much impressed upon reaching Nakuru. He got attracted to the place and decided to settle. The family continued to live there comfortably and established themselves and our community in the local society.

Since the early days Marhum was very well known for his affection towards the community at large. His hospitality to our brothers who passed-by Nakuru on their way to Kampala or Mombasa by rail was well known. He often served breakfast to our brothers in the train on its early morning schedule. As the years went by, the family grew and they established at their home a Mehfil which was later named Mehfile Shohada–e-Karbala. Regular majalises were held to preserve and inculcate our faith in our future generations.

More families joined to settle in early seventies. The arrival of Alhaj Husseinbhai Jaffer and his family added flavor to the majalises and the community started to have more gatherings with the increase of families. On 26th January, 1981 the Jamaat was officially registered with a total population of 71.

Br Mumtaz Kassam was elected as the first Chairman. With his committee, he ran the Jamaat for one year after which the Jamaat became dormant for the next ten years. One of the reasons for this dormancy was the rapid decrease in the population of our community. The Jamaat was revived again on the night of Eid-e-Zehra on 6th September 1992 when Br Hassan Fazal was elected as the Chairman. The revival of the Jamaat was necessary as a plot had been identified for the purpose of constructing a complex for our community members. Br. Hassan and his committee worked tirelessly for seven years (having been re-elected in the process), to construct and complete a complex which includes a Mosque, Imambargha, Aalim’s residence, Musafirkhana and two flats for income generating purpose. These are located on a one acre plot which is large enough to accommodate future development projects. The K.S.I Supreme Council of Africa and the World Federation provided good support to the Nakuru Jamaat to ensure work was successfully accomplished.

Currently the Jamaat has a membership of around seventy with all families involved in running successful businesses. The Jamaat organizes regular Madressah classes for our children and the results have been very encouraging. Being a small town, the community is very closely knit in its social and welfare affairs. This is a great attribute which had led to the success of the Jamaat. Considering the strategic location and the good business environment in Nakuru, the Jamaat is hoping that more members of our community will move to Nakuru especially now that the complex is ready and operational. The Jamaat has expressed hope to consolidate its activities in future and to continue with its good work under the new leadership of Br. Murtaza Janmohammed.

Nakuru, the fifth largest city in Kenya, is situated at the base of the Great Rift Valley with a breath-taking landscape around it. Its population is about 500,000 including 3000 Asians - mostly Muslims and Hindus. The town offers good economic prospects to our businessmen, many of who have prospered after putting in modest initial investments. Education facilities are also good with an option of choosing a local or overseas system of education. There are private and public schools and there is also an Islamic school built and run by our community members on a private level. The town also offers good medical facilities while for recreational purposes there are ample of sporting options and other social activities. The population of KSI Jamaat Nakuru has unfortunately dropped below 10 heads presently, the reason being economic conditions, education for children and poor business conditions.