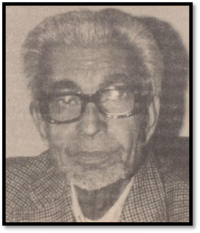 Alhaj Mohammed Hussein Ibrahim Ukka was a prominent elder of Hyderi Imambargha. He was kind hearted, likeable and respected personality. He had immense feelings for the community and often contributed good constructive ideas in community gatherings looking at a larger interest of the community before anything else. As a person with vast experience and intellectual attributes, he often wrote simulative articles in the Jamaat newsletters and other forums for the benefit of the community.

Mohammed Bhai was born in 1930 in a small village near Kampala, Uganda and enjoyed a progressive career in the accounts division of East Africa Airways (EAA) for 25 years. During the political turmoil in Uganda in 1970 he assisted our community members by facilitating air tickets to leave the country. He came to the U.K. in 1973 and settled in South London. He took a keen interest in Idara-e-Jafferia and was also a Trustee for the Idara until he passed away in May 1987 and was buried at Brookwood Cemetery, outside London.