In his cricket sweater and white flannels Agha Mehdi looked every inch an elegant cricketer. His smooth run up and the momentum that he gathered as he came in to bowl his right arm fast medium deliveries at Mnazi Moja’s first pitch or Khalifa ground enlivened the Zanzibar cricket scene and is still etched on memory. A man of few words and always smiling Marhum Agha Mehdi was calm, cool and a gentle person. Never one to throw tantrums or indulge in any form of controversy, he was sportsman personified.

Agha Mehdi was always among wickets and spearheaded Zanzibar’s opening attack with Akber Dedhar. Both had splendid bowling action. While bowling for Arabs (cricket team), he opened their bowling with another speedster Ahmed Bachu. The Juma Aley built Arabs team was a force to be reckoned with and revolved around uncle Agha Jawad, the then Zanzibar’s finest leg spinner, and the four talented Marashi brothers (June, Mehdi, Hadi and at times Ahmed) a la Pakistan’s Mohamed brothers (Wazir, Hanif, Mushtaq and Sadiq). They played pivotal role in the performance of the Arabs team in Zanzibar. Talking of the brothers their mentor the late Juma Aley had expressed his great delight in having them in the team as they consolidated ‘Arabs’ standing in Zanzibar’s cricket tournaments in the pre Revolution days.

Sadly the elder brother Agha June, a class batsman whose style the Zanzibar cricket lovers still cherish, passed away a couple of years back. Now we receive the sad news of Agha Mehdi’s demise in Dubai. That also reminds of the late Saidi Nyanya, their colleague and great admirer, who was a thorough gentleman. May Allah (SWT) rest their souls in peace. Marhum Sayyid Agha Mohammed Mehdi Hassan Marashi passed away on Tuesday 7th August 2018 in Dubai. 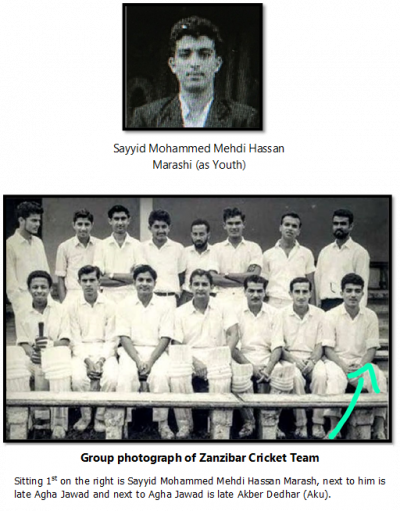 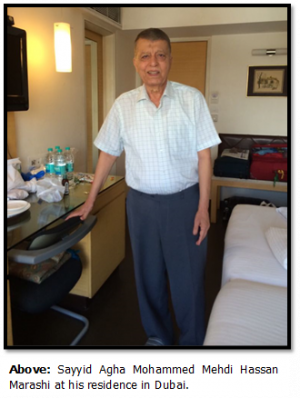