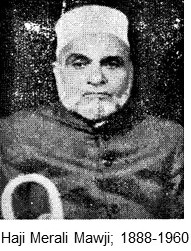 Haji Merali Mawji was born in Khandna, India in 1888. At the age of 12 he left his parents to vie for better prospects by sailing to Kilwa where he worked at Esmail Bhalloo. In 1906, he went to India to get married and on his return went to Njinjo, a village near Kilwa where he opened a small shop. In 1909 he moved to Kilwa. In 1923 he went to Iraq and Iran for Ziyarat. In 1946 he went for Hajj. In 1948 he closed his business in Kilwa and moved to Monduli where he continued the business. He has rendered invaluable services to Kilwa Jamat. He was also trustee of Arusha Jamat. Alhaj Merali Mawji died on 28 February 1960 in Mumbai, while on a Ziyarat trip.