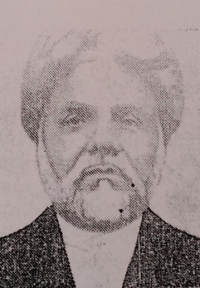 Madou bhai Samdjee was born in a farming family at Ganagam, Jamnagar, India in 1880. As a child, he used to help his parents on the farm. When he was 13, a relative informed his parents regarding an opportunity to go and work in Madagascar at a salary of 50 Riyals for a three year contract. In 1893, Madou arrived at Morovay with one pair of clothes and one cap from India. His parents had already been paid the three years’ wages in advance and as a result he would not get a penny during his stay of three years.

During daytime Madou was given very hard work. At night he was given the duty of waving the fan to cool and ward off the mosquitoes while his boss and his wife were asleep. Due to his 18-hour work schedule, he would sometime doze at night while waving the fan and this would enrage his boss who would kick him and bring him to his senses to perform his duty. Once the boss would have fallen asleep he would go and wash his one pair of clothes, ready to wear it the next day. Morovay town was infested with mosquitoes and mosquito nets were a necessity. However Madou did not have money to buy a mosquito net. The employers during those days did not provide such facility to their workers. Madou would thus look for an opportunity to sneek into the mosquito net of his work colleague Br Rajpar Walji while he was fast asleep.

After completing his contract period of 3 years, Madou left his job and took a loan of 80 Riyals from his cousin sister and travelled 10 miles away from Morovay where he started a petty business in foodstuff. He used to buy foodstuff locally and take it to Morovay to sell. Once while crossing the river, his boat capsized. As a result, he lost his foodstuff and he was thrown into the crocodile-infested river. One of the crocodiles had almost got hold of him but due to his expertise in swimming, he was able to swiftly escape from the crocodile. He finally reached Morovay with nothing except his wet clothes which he was wearing.

At Morovay, he purchased a bag of salt on credit from Br Ladha Datoo. He then started his journey to Maevatanana selling the salt to customers on the way so that he could earn some money. He finally completed the journey in 30 days. He then joined in the employment of a Bohra brother called Kamruddin. His new job was to take a cart full of goods to the interior and sell them. Luck was not in his side again. He had hardly completed a year when his employer had a huge loss in business and as a result he was declared bankrupt. Bankruptcy was considered a severe offence and as a result his employer was jailed for three months. While going to jail, his employer requested Madou to arrange for the wife and children to travel back to India. Fortunately, Madou landed the job of a book-keeper in the town of Majunga. He used his salary to purchase food and send it to his boss in jail and also send money to his employer’s family in India.

Gradually opportunities arose for Madou to open a shop at Maevatanana. Before coming to Africa, Madou’s parents had already performed his engagement with a girl in India. This practice of child engagement was very common in India. The parents of the girl were putting a lot of pressure on Madou’s parents to go ahead with marriage. Madou had insisted that the girl had to convert from Ismaili to Ithna-asheri so that the marriage goes ahead. The girl’s father initially refused but finally gave permission for conversion. As a result of this marriage, the parents of Madou were ex-communicated for 10 years by the Ismaili community in India. Madou’s mother passed away after his wedding. Madou decided to bring his widower father to Maevatanana where he passed away in 1905.

Despite leading a very difficult life, Madou bhai was an ardent worshipper. He had been to Hajj and Ziyarat twice. When Madou went to Ziyarat in 1928, he took with him his first employer’s wife. Madou had already forgiven her for her treatment of him during his first job. During the whole trip he treated her kindly and served her like his own mother. This conduct of him reveals of his magnanimity and generosity.

The old Imambara and Musafarkhana at Maevatanana has been donated by Haji Madou bhai. Although he himself had not pursued education, he gave a lot of importance to providing education to our children. To this end, he had made a lot of effort to hire a teacher for the children of the community. The teacher was called Mr Amratlal. Madoubhai was a deeply religious man. Whenever there arose a need to paint the mosque, he would insist on doing it himself. He could be observed doing this work with a smiling face and for the pleasure of Allah.

This great and devout servant of Allah met his last breath on the sacred night of Laylatul Qadr. After performing the aamal of 19th night of Ramadhan and after attending majlis, he collapsed on the way home and passed away the next morning.