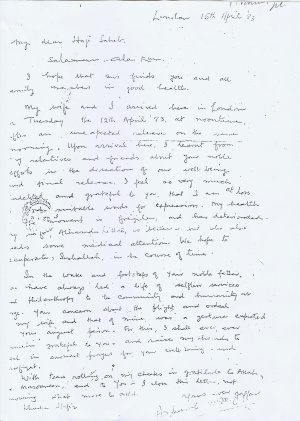 I hope that this find you and all family members in good health.

My wife and I arrived here in London on Tuesday the 12th April '83 at noon time, after an unexpected release on the same morning. Upon arrival here, I learnt from my relatives and friends about your noble efforts in the direction of our well being and final release. I feel so very much indebted and grateful to you that I am at a loss to find suitable words for expression. My health at the moment is fragile and has deteriorated. My wife, alhamdulillah, is better but she also needs some medical attention. We hope to recuperate, InshaAllah, in the course of time.

With tears rolling on my cheeks in gratitude to Allah, the Masoomeen, and to you, I close this letter, not knowing what more to add.