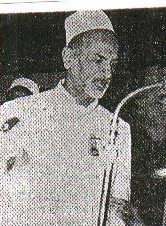 Haji Husseinbhai Haji Muraj was one of the illustrious sons of our community. He was born in Mogadishu, Somalia into a family who were champions in community service. He grew up to become a well known personality not only in Mogadishu, but among other African communities as well.

From 1930 to 1945, Haji Husseinbhai rendered various services in the Jamaat during his father’s - Hajibhai Muraj – Presidency. It is worth mentioning that Haji Bhai Muraj was awarded 2 medals – the Star of Italy and Count of Italy from the Italian Government.

In January 1969, Haji Husseinbhai was awarded the Husseini Medal by Alhaj Mohamedali Meghji, President of the Federation of KSI Jamaats of Africa. It was at this event that Alhaj Mohammedali Bhai voiced that “community members should serve the Jamaats for the sole pleasure of Allah (swt) and that the people should realize and appreciate the efforts put by Momineen who serve their communities.”

The World Federation of KSIMC]