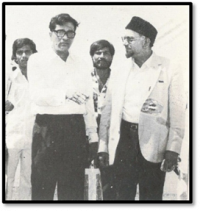 Among the achievements of the World Federation is the formation of Gujarat Federation during May/June 1979. A Constitutional Conference was held in Bhavnagar where delegates from nearly twenty-four Jamaats attended. Ever since 1976, we have been persuading Khoja Shia Ithna Asheri Jamaats of India to form an All India Federation, but to no avail.

Bombay Jamaat was requested to take an initiative, with a sure hope that other smaller Jamaats would follow in the wake and co-operate. As time lapsed, and no result was visible, the Jamaats of Gujarat decided to take a lead. The Trustees of Masoomeen Trust, its well-wishers and advisers set a stage ready for this eventful day, from Bombay. Among those who took a leading part in this was Mr Jafferali “Aseel” a leading and well-informed journalist and intellectual of our Community. He is seen here above with the Chairman of the World Federation at Bhavnagar airport where they were warmly received by leader of the Jamaat and many other delegates. 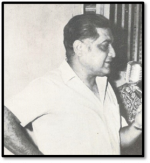 Dr M. F. Kapasi, a renowned medical practitioner and surgeon of Bhavnagar is the first Hon. Secretary of the Gujarat Federation. Born in 1935, Dr Kapasi completed his MBBS in Grant Medical College, Bombay and later on served as a house surgeon in G.T. Hospital and J.J. Hospital, Bombay. Later on, he served as a Medical Officer in Charge of Mengusi Government Hospital in Bilimora (Gujarat) for three years.

Presently, he runs his own surgery and general nursing home in Bhavnagar. Among his social service, Dr Kapasi is the past president of Lions Club of Bhavnagar and past District Chairman of Lions International District 304-002. He is an honorary surgeon to Lions Cancer Centre in Bhavnagar. Dr Kapasi’s services to Bhavnagar Jamaat are well known. He liked and respected by all for his polite and amiable nature. He speaks and writes Hindi, Marathi and English with ease.

For the purpose of efficient and meaningful operations, the World Federation must have its agencies in all parts of the World. It is virtually impossible to cater to the needs of the people with diverse cultural, economic and educational backgrounds. India, where the number of Shia Ithna – Asheris is appreciably great, and where hundreds of families, sadaat and non- sadaat, live below subsistence level, we were able to secure the services of MASOOMEEN TRUST, which is our agency today, and which operates under our auspices and guidance. The Trustees of Masoomeen Trust are Haji Mohamed Zakariyya Mirstri, (Chairman), Haji Gulamali Bhanji (Managing Trustee and Hon. Secretary), Haji Umedali G Merchant (Bhanabhai), Haji Fidahussein Wadiwalla and Haji Babubhai Chunawalla. 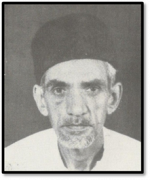 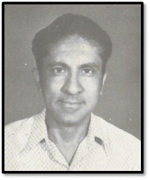 Haji Saheb always visit the remote small Jamaats in various provinces and states, carries out an on the spot survey, compiles his extensive reports and finally conveys to us for perusal and action. At age of 67, Haji Saheb’s zeal and enthusiasm is an example worth emulating for many young man of our Community. 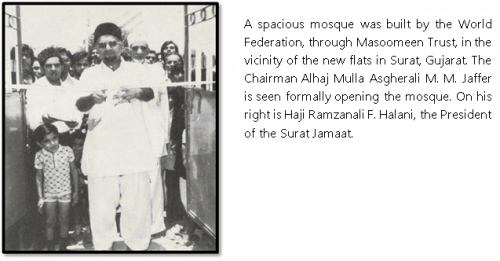