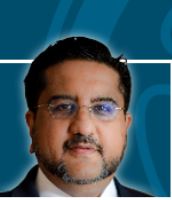 Ali Hassanali was born in Dar es Salaam, Tanzania and migrated to USA in 1996 for further studies. He holds a degree in Computer Engineering and began his professional career with Citi Group in the Software Engineering field. After a span of 18 years at Citi Group, Ali transferred to Mt Sinai Hospital briefly before becoming the Global Head of Software Asset Management for Morgan Stanley.

Ali has had approximately 30 years of community service with the New York Jamaat where he taught as a Madrasah teacher for many years before eventually joining the SIJNY Managing Committee, first as a nominated member and later within the Executive Body as Joint Secretary. In 2018, Ali was elected as the President of SIJNY where he appointed the first female Vice President in SIJNY’s history. Currently, Ali is serving his second term as SIJNY President with a very young team of future leaders.

As a Councillor appointed by the President, Ali will primarily establish a closer working relationship between The World Federation and NASIMCO. At a global level, he will focus on building engagement with the civil society.