The Africa Federation Secretariat is delighted to learn that Sister Zehrabanu Janmohamed of Nairobi, famously known as Jackie has been conferred as a Senior Counsel by the Chief Justice and the President of the Supreme Court of Kenya. Such an achievement by a member of the Community is very heartening and gratifying.

Zehrabanu daughter of Mohamed Taki Janmohamed and Khurshid Tejani Janmohamed, completed her ‘A’ levels education in Nairobi Kenya and thereafter proceeded to U.K. for her LLB degree at the University College London (UCL) which she obtained in 1986 and then proceeded to become a Barrister at Law, Lincoln Inn in 1987. She returned to Kenya in 1988 to pursue her legal carrier joining a law firm, Archer & Wilcock as a pupil in 1988 climbing through the ranks to become a partner in 1993 and senior partner in 2002. She currently practices in the High Court, Court of Appeal and Supreme Court of Kenya.

She has been awarded the ‘Mzalendo Award’ by the President of the Republic of Kenya, His Excellency President Uhuru Kenyatta in 2020 for her philanthropic works of food distribution to 30,000 vulnerable families in Kenya during the Covid-19 pandemic. With the wealth of experience in the legal field, she has now been conferred with the title of Senior Counsel in Kenya and is the first Muslim to have been conferred with this title. She is one of the 45 Senior Counsels in all of Kenya. 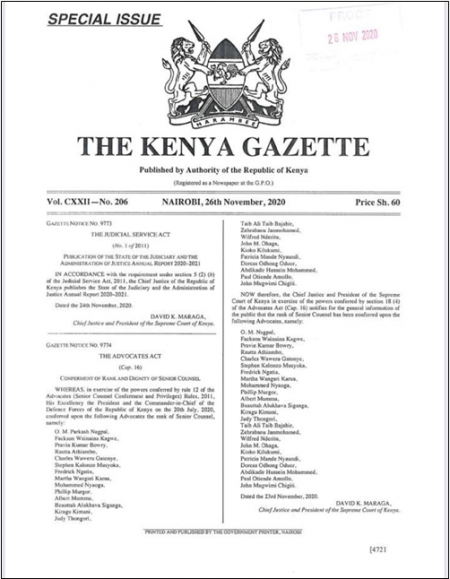