Sheikh Nuru Mohammed has been nominated as UK’s most Impactful Imam 2021 at The British Beacon Mosque Awards. The awards took place on Saturday 04 December, with Sheikh being selected from a list of influential scholars from across the UK. The British Beacon Mosque Awards also nominated KSIMC of Birmingham as the finalists in the Outreach Category, and their Muhammadi Madrasah were finalists in the Madrasah Category. 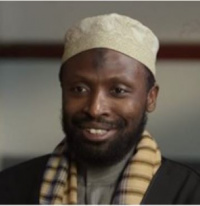 Sheikh Nuru has played a significant role in the development of our community globally. He is currently the Resident Alim for KSIMC of Birmingham since 2016.

Born in Ghana, Sheikh holds a BA in Islamic Philosophy and Mysticism from Al-Mustafa International University in Iran, an MA in Islamic Studies at Middlesex University and is a visiting fellow at Cambridge University. Sheikh is also a qualified civil and commercial Mediator and is the Chair of the Islamic Cultural and Religious Affairs (ICRA) of CoEJ.

In addition to playing a significant role in the development of our Community, Sheikh has played an active role in the wider society, particularly in Birmingham where he resides. He is the co-chair of Citizens UK Birmingham and a Trustee of Citizens UK. He is also a Governor at a local Secondary School and a member of the Standing Advisory Council on Religious Education in Birmingham.

Sheikh has played an active role in encouraging others to take up the Covid-19 Vaccine, and was interviewed by a large number of journalists over the recent months.