It is with immense sorrow and grief that the Africa Federation Secretariat received the sad news of the demise of Alhaj Sheikh Abdillahi Nassir who passed away in Mombasa, Kenya on Tuesday 11th January 2022 (8th Jamadi-ul-Aakhar 1443 A.H.) and was buried at the Ganjoni Cemetery, Mombasa on the same day. The passing away of Alhaj Sheikh Abdillahi Nassir is a great loss not only to his family members, students and colleagues but also the entire Shia community in East and Central Africa. 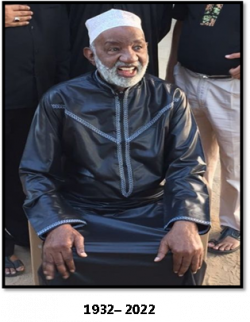 Sheikh Abdillahi was born in Mombasa on 1st June 1932 and his early education commenced with Madrasah education at a young age of four years and continued attending Madrasah from 1936 to 1946.

He obtained his secular education from the Arab Boys Primary School from 1941 to 1949 and later joined the Zanzibar’s Bet-al-Ras Teachers Training College from 1950 to 1951. Upon his return to Mombasa, he taught at the Arab Primary School from 1951 to 1954 and then joined the Mombasa Institute of Muslim Education as an accounts clerk and as a part-time religious Instructor, from 1955 to 1957.

Sheikh Abdillahi devoted part of his time in preaching and carrying out Tabligh activities from 1954 till 1959. From 1960 to 1980 he engaged in translating and commenting on the Holy Qur’an during the holy months of Ramadan while living in Mombasa (1960-64) and later when he settled in Nairobi (1965-80). From 1978 to 1980 he also worked as the East Africa Representative of the Jeddah-based WAMY (World Assembly of Muslim Youths).

With his intellectual knack and spirit of inquiry, he did not blindly follow the widely held common perceptions about the Shia faith but read books written by Shia scholars and interacted with members of the Shia community with a view to understand the Shia faith deeper and better. In due course, he showed growing leanings towards the Shia faith and his question/answer sessions on the Kenya Broadcasting Corporation’s radio programs from 1977 to 1980 aroused much interest.

Sheikh Abdillahi delivered lectures in many places around the world including India, Pakistan, U.K., USA and Canada and the West Indies since he was able to deliver lectures in both English and Kiswahili. Since 2004, he set up a free reading room public library in Mombasa. Sheikh Abdillahi has written/assisted in writing several books and booklets on Kiswahili language and on Islam some of which have been translated into English and Rwandese.

Listed below are names of few of his work in this field;

In April 2011 at the 72nd Supreme Council Session in Mombasa, the then Africa Federation Chairman Alhaj Anwarali Dharamsi bestowed the Abbasi Medal to Sheikh Abdillahi Nassir in recognition of his long outstanding, honorable and dedicated services in the cause of Islam and for propagating the madh'hab of Ahlul Bayt (‘A). Sheikh’s humbleness, pleasant soft tone, hard work, and knowledge were outstanding and played a vital role in the propagation of the Madhab of the Ahlulbayt (A’). 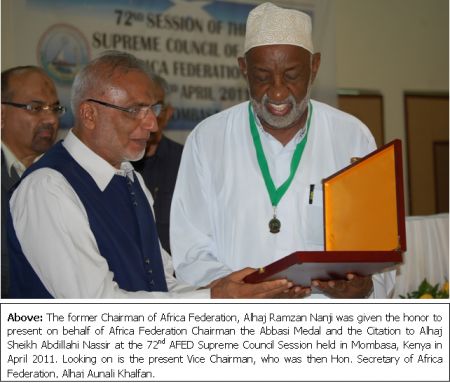