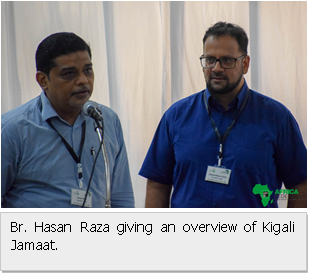 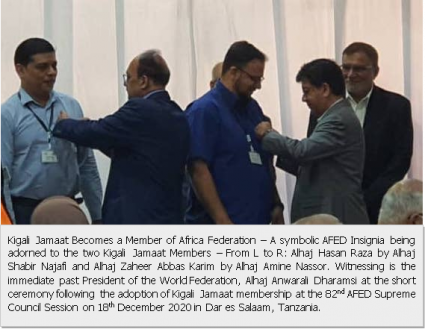 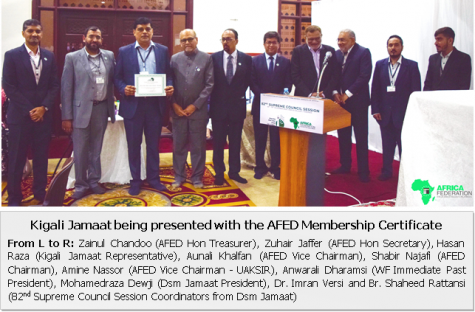 The application by the Khoja Shia Ithna-Asheri Rwanda Jamaat – Kigali for membership of the Federation of Khoja Shia Ithna-Asheri Jamaats of Africa was tabled at the 82nd Supreme Council Session held in Dar es Salaam from 18th to 19th December 2020. The Vice Chairman of Africa Federation, Alhaj Aunali Khalfan read out the letter of application from Kigali Jamaat and explained to the Councillors on the process of the application, as per clause 26d of the constitution of Africa Federation, which would then be ratified in the next session of the Conference as per clause 20 of the constitution. All relevant documentation from Kigali Jamaat were received by the Secretariat with the application.

The Kigali Jamaat Chairman Br. Amjad Ali Merchant and the Hon Secretary Br. Nasir Raza could not make it to Dar es Salaam for the Supreme Council Session, they were represented by Br. Hasan Raza and Br. Zaheer Abbas Karim, members of Kigali Jamaat. The two members provided an overview of the Jamaat from its establishment, the present activities of the Jamaat and the various opportunities available in Rwanda for those who may wish to establish businesses etc. Few families from Tanzania have moved to Kigali and have established manufacturing businesses there. After some deliberation on the subject matter, the membership of Kigali Jamaat was unanimously voted for by the Councillors present at the Session. In April 2019, Lilongwe Jamaat in Malawi became the 42nd member to join Africa Federation. Kigali Jamaat in Rwanda becomes 43rd member to join the Africa Federation family in December 2020. With the latest addition, the total population of members of Africa Federation stands at about 19,000 heads.

In 2001 they were five Khoja families residing in Kigali who began organizing majalises and azadari programmes at their residences, in 2013 the number of people had increased and a premise was rented out for use as Imambargha for religious activities and also a centre of Kigali Jamaat. In the year 2014, the first Jamaat election at the General Meeting was held and the Jamaat constitution was adopted that paved way for the Managing Committee of Rwanda to be formed. Jamaat elections are held every three years. The current number of heads in Kigali stands at 109. The Ja’afery Madrassah for boys and girls is an institute which operates under the Jamaat, currently has 24 students and 10 teachers who are all volunteers.

For a long-term plan, the Jamaat wishes to acquire its own land to construct a Centre which will accommodate Masjid, Imambargha and other essential amenities. Also, a land for Kabrastan. The Jamaat in consultation and collaboration with Africa Federation will pursue this project following the required feasibility, logistics, financial analysis and other requirements are completed. Rwanda is also home to a large number of Indigenous Shia Brethren who are supported by some of the Khoja brothers. Various religious activities and social services are carried out to promote the Madh’ab of Ahlulbayt (‘A) in Kigali and in the suburbs. 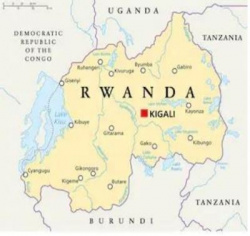 Republic of Rwanda is a landlocked country, known for its breath-taking natural beauty, lies south of the Equator in East-Central Africa. The Country is surrounded by scores of mountains in the west and savanna to the east, with plentiful flora, fauna, and lakes spread out across the country. The capital is Kigali, located in the centre of the country has a population of about 1 million. Total population of Rwanda as per current statistics is close to 13 million. It is considered the safest country for habitation in Africa with minimal crime rate, secure environment, pleasant climatic conditions and clean, hygienic surroundings. The Country is rated amongst the top nations in Africa for ease of doing business. There is no minimum amount required to invest in the country, and the Rwanda Development Board (RDB) is a one-stop entity committed to support both business owners and investors.