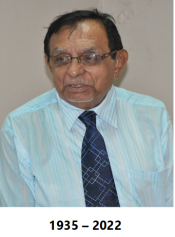 The Africa Federation (AFED) Secretariat received with deep sorrow and sadness the news of the death of Alhaj Roshanali Abdullah Fazal which occurred at his home in Dar-es-Salaam on Thursday 18th August 2022, he was buried in Dar es Salaam the following day after Jumaah prayers.

Marhum was a dedicated community member and served his home Jamaat Bukoba for many years before moving to Dar-es-Salaam where he served in various sections which include Tabligh and Medical. Roshan Bhai served as Chairman of the then Setwel Board of Africa Federation and played a major part in resettling the displaced members of our community from Somalia in various parts of the world.

Marhum also served Dar es Salaam Jamaat in Medical Board, he also served in Bilal Muslim Mission of Tanzania in 1985/1986 during the period of the establishment of Bilal Dispensary at Temeke.

Marhum played a major role in the establishment of the AFED Archives sub-section which was formed in 2007, he was the head of the sub-section of Archives until his retirement in 2014. He was instrumental in procuring some equipment like scanners and printers to enable the Archives documents in the possession of the AFED Secretariat to be scanned and saved digitally. His passion in the Community services was immense and he continued to share his collection of documents and photographs with the Archive section for several years after his retirement. 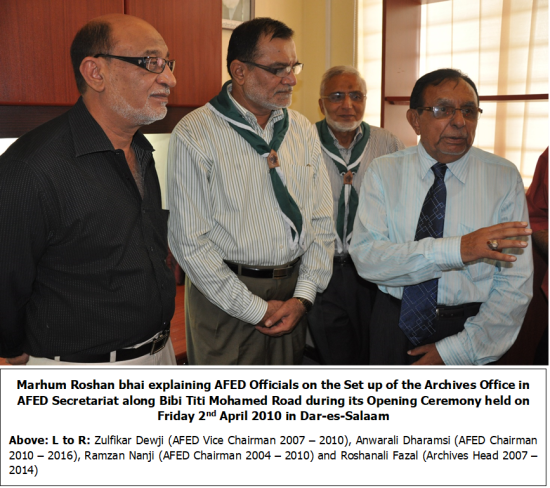 On behalf of the Africa Federation Chairman, Alhaj Amine Nassor, Office Bearers, Trustees and the Secretariat staff, we convey our heartfelt condolences to Marhum’s son, daughter, grandchildren and all family members.