NASIMCO was established in 1980 as a Shia Ithna-Asheri umbrella organization to unify North American Jamaats and provide the following services.

NASIMCO's vision is to provide a common structure and framework to meet the religious, cultural and social needs of the Shia within its area of operations

NASIMCO's mission is to harness talents and resources available in member communities for the greater good of global humanity and our communities.

NASIMCO's vision for the future is based on the active engagement of the local North American community and the Shia diaspora globally. Our action plan seeks to position NASIMCO as:

(1) A leader in aid deployment through a meaningful and mutually beneficial collaboration of existing network and resources, and Development of streamlined processes and procedures which will allow efficiencies of scale and scope.

(2) An active player in alleviating poverty through programs such as Skill building & training, Entrepreneurial and employment coaching. A unifying parent organization dedicated to meeting needs of the growing member jamaats through integration, resource sharing, and capacity building

NASIMCO shall be an umbrella organization existing to serve and guide its constituent members to foster unity and promote religious, educational, social and economic advancement of the communities.  It shall seek to achieve this unity of purpose By coordinating requisite policies and functions,  By facilitating exchange of ideas and experiences,  By channeling resources in support of individual and joint member initiatives, and By liaising with Muslim and non-Muslim organizations primarily within North America and peripherally beyond.

ARTICLE 2: TITLE A not for profit organization of North American Shia Ithna-Asheri Muslim Communities is hereby established, and shall hereafter be referred to as NASIMCO.

To teach, promote and propagate the Shia Ithna-Asheri faith. To collect and disburse zakats, khums, other religiously sanctioned funds, and charities within the guidelines of the Shia Ithna-Asheri sharia.  To raise, receive, invest and create funds in furtherance of its objectives. It shall also have the power to buy, sell, lease, build and own properties.  To coordinate, facilitate and initiate activities that promote, unify and advance the social, economic, educational and religious interests of the constituent members.

Shia Ithna-Asheri communities established in Canada, the Caribbean countries and the United States may apply for membership.  For purpose of this clause membership shall be defined as those organizations established as religious, non-profit organizations, as recognized by the applicable local law and so registered with the local governmental bodies.  Such organizations, as defined in Article 4 (2), may apply for membership to the Honorary Secretary of NASIMCO. The applicant shall provide the Honorary Secretary with the following documents:

The Honorary Secretary shall present the application at the next Conference with the Executive Council's recommendation to the Conference to accept or deny the application. The Conference shall decide on a simple majority of the delegates present. The Conference may in its absolute discretion accept or refuse any such application. An organization whose membership application is accepted shall become a member effective at the conclusion of the Conference and upon receipt of the subscription.  An organization whose membership application is denied membership may reapply after a wait of at least two years from the date of last application.  NASIMCO shall affiliate with a parent organization(s) of regional bodies having similar aims.  A current constituent member who at the time of this adoption of this amended constitution is not considered a membership-based organization with an elected executive from among the membership shall have ninety days upon notification by the Secretary to amend its charter to comply with providing the documents stated in Article 4 (3). Failure to comply will result in this constituent member being deemed as a member under the first tier as stated in Article 5 (6)(a).

Each constituent member shall pay an annual subscription in advance for the ensuing calendar year. Subscription shall become due by January thirty-first of every year. All subscriptions shall be paid to the Honorary Treasurer.  The subscription shall be determined by a simple majority of the delegates present at a Conference, where the said item has been placed on the agenda.  Any member who fails to remit their subscription, including all outstanding arrears, by the due date shall forfeit their voting privileges for the ensuing year.  A member who has resigned shall have their voting privileges restored after re-application and acceptance of their membership, and when all subscriptions, arrears and subscriptions that would have otherwise been due from the date of resignation are paid in full.  For verification purposes a constituent member, upon request by the Secretary, shall provide the Executive Council with its most recent financial statement and/or list of membership.  The subscription shall be assessed in five tiers. A base shall be first determined.

The Extraordinary Conference may be called by:

The quorum at all Conferences shall be one-third of the number of eligible constituent members.  The quorum at all Executive Council meetings shall be fifty-one percent of the Executive Council and a minimum of two members from among the President, Vice-President, Honorary Secretary or Honorary Treasurer.  At the commencement of a Conference, the Honorary Secretary shall determine such a number and inform the Conference or the Executive Council if a quorum has been satisfied.  If a quorum is not satisfied, the membership present at such a meeting shall determine the place and date of the next meeting to transact the agenda no earlier than thirty days of such date and inform the Honorary Secretary to notify the membership. At the subsequent meeting the quorum shall be deemed to be satisfied.

Each eligible delegate present at the Conference shall be entitled to one vote.  All election votes in contested offices shall be by secret ballot, unless there is unanimous consent of the delegates present. If there are more than two candidates contesting an office, and if no candidate receives more than fifty percent of the vote, the two highest vote recipients shall contest the office again.  In the event of a tie vote, the position shall again be contested until the tie is broken. Candidates for office must be members in current standing of one of the constituent members.  The President, Vice-President, Honorary Secretary and Honorary Treasurer shall not hold concurrent elected office with a constituent member.  The candidate for President must be nominated by a constituent member and the candidate must submit his or her nomination in writing to the Honorary Secretary at least forty-five days before the date of the election. If at least one nomination is received forty-five days before the date of the election, then all further nominations shall be closed.  The Honorary Secretary shall notify the constituent members of all nominations received at least thirty days before the date of the election.  If no nomination(s) are received by the prescribed dates, the Honorary Secretary shall so notify the constituent members and the election of the President, along with other offices, shall be held at the Conference from amongst eligible candidates present.  Eligible candidates for elective office must be present but need not be delegates at the Conference.  At a Conference where the Executive Council is elected, the election shall be the last item of agenda. Before an election is exercised, the delegates shall elect amongst themselves an Election Chairperson. Upon election of the Election Chairperson the Executive Council's term shall be deemed to have expired, including that of all committees appointed during such term. Upon election of the succeeding Executive Council the new officers shall assume office and the position of the Election Chairperson shall be deemed expired for that Conference.  The Election Chairperson shall Be a delegate; Neither be holding NASIMCO office nor contesting any;  Conduct the election in a fair and impartial manner; and  Not cast any election ballot. Where NASIMCO is affiliated with another organization NASIMCO shall cast eligible votes for the presidency of the affiliated organization, if contested by at least two candidates, based on the ballots of eligible constituent votes and Executive Council. In such an event the Honorary Secretary shall notify the constituent members of the candidates and seek written ballots (postal, fax, electronic) at least thirty days, or earlier if applicable, before NASIMCO's votes are due. The Honorary Secretary shall make proportional representation of NASIMCO 's votes based on ballots received from the constituent members, and shall notify the constituent members within fifteen days of the results thereto. Where NASIMCO is affiliated with another organization and the majority of the Executive Council deems a matter significant in order to cast NASIMCO's votes in the said deliberation, then NASIMCO shall cast its votes based on the procedure in Article 10(11).

The President shall be the chairperson of all Executive Council meetings and Conferences. In his/her absence the Vice-President shall assume the chair.  The President shall manage the Secretariat established by the Conference.  The President shall coordinate the implementation of the decisions or directives resulting from the Conference.  The Vice-President shall be the liaison with all non-constituent organizations.  The Honorary Secretary shall Prepare the agenda and notification of all meetings in consultation with the President; Record and maintain minutes;  Maintain and update annually the membership records; Attend to and maintain correspondences; and Serve as the Parliamentarian The Honorary Treasurer shall Be responsible for all financial transactions of NASIMCO and maintain full and proper financial records;  Forthwith deposit all NASIMCO monies with the bankers, as directed by the Executive Council; Collect subscriptions from constituent members;  Prepare an annual budget for the ensuing year for approval by the Executive Council and the Conference; Present interim financial statements on a quarterly basis, and within forty-five days of the closing of the quarter, to the Executive Council, and shall submit the same for inspection of the Conference as and when required;  Sign all checks and all other financial documents and shall present for counter signature to the President, or in his/her absence, the Vice-President; and  Present at the Conference audited accounts comprising income and expense statement, balance sheet and supporting notes thereof for the year ending December thirty-first; and  Install and implement internal control and procedures of all financial records of NASIMCO.

The Auditor(s) shall be appointed at a Conference and they:

- Shall not be delegates of the Conference.

- Shall have the power to inspect the accounts of NASIMCO as and when they deem necessary, and report to the Executive Council and the Conference;

- Shall be required to perform an annual audit, by March thirty-first, and report to the Executive Council and the Conference.

NASIMCO may at any time be dissolved by consent of at least ninety percent of the number of constituent members testified by their signatures to an instrument of dissolution provided that a resolution to this effect has been adopted at an Extraordinary Conference called for such a purpose.  In the event of the dissolution of NASIMCO, assets of NASIMCO shall be handed over, on such terms and conditions, and to such other organization or organizations having similar aims and objectives as NASIMCO, as determined by the majority of delegates present at the said Conference. 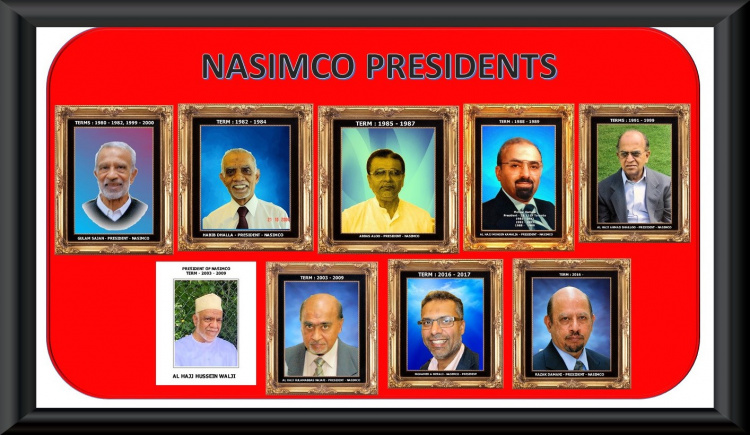