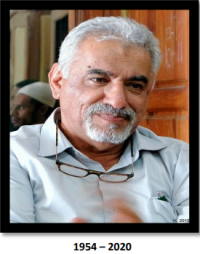 It is with immense sorrow and grief that Africa Federation Secretariat received the sad news of the demise of Murrabbi Alhaj Mohamedraza Mohamedhassan Khamis, the Chairman of The Institut Islamique de Madagascar (INISMA) and the Head of Husseini Madrassah of Antananarivo KSI Jamaat. He passed away in Majunga, Madagascar in the afternoon of Saturday, August 8, 2020 (18th Zilhajj 1441 A.H.) and was buried there on the same day.

The passing away of Mohamedraza bhai is an irreplaceable loss not only to his family members but to the entire community in Africa. Marhum was born on 26th June 1954 in Morondava, the town located in the west coast of Madagascar from where he began his community services from his youth as a volunteer in Morondava Jamaat and later on he served as Chairman of the Jamaat before moving to Antananarivo, the capital and largest city of Madagascar. He established a thriving agricultural and export business enterprises in Madagascar which over the years of his hard work and determination, the business expanded in many folds.

In his noble endeavour, Alhaj Mohamedraza Khamis rendered selfless services in different capacities to the Community in Madagascar. He had a vision and keen interest in external Tabligh – The propagation of the Madh’ab of Ahlulbayt (AS) amongst the indigenous population working closely with Marhum Roshan bhai Jameel, Marhum Abdul bhai Momin, Murrabbi and Alhaj Raza Aly Hiridjee in the Tabligh institution known as INISMA and spending significant amount of his time towards the welfare, education and healthcare sectors. The main centre and offices of INISMA are located in Antananarivo, having 83 centres spread over in many parts of Madagascar with about 20,000 indigenous members who have accepted the Shia Ithna-Asheri faith.

In Africa Federation, Alhaj Mohamedraza Khamis played pivotal role for many years having also served as the Vice Chairman of Africa Federation from Madagascar from 2003 to 2007, and also as a Councillor regularly attending Africa Federation Supreme Council Sessions and Conferences. He had excellent command of Gujarati, and when he spoke; councillors and delegates listened attentively to his well-articulated language, while in the course of his speech he would interject humorous anecdotes, this was one of his several strengths in driving his message in an amiable way to the members. His long experience and knowledge of the history of the Khoja Community was admired by many, alas! we have lost a legendary speaker and a towering personality whose immense knowledge, affection and history of our Community, especially of Madagascar will be missed by many and the coming generations. 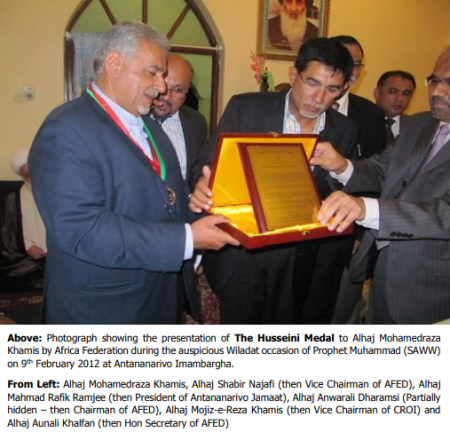 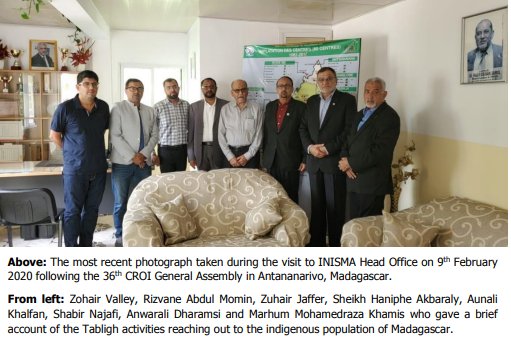 The Madagascar hospitality (Mehma’an Nawazi) is par excellence, Marhum was one of those several personalities who would go out of his way to look after the guests and visitors making sure that they are comfortable and well looked-after, the delicious and the variety of food remains the hallmark of Madagascar till today, both brothers Alhaj Mojiz-e-Reza Khamis and Alhaj Mohamedraza Khamis have been great hosts to many visitors.

Marhum is survived by his beloved wife, Fatim bai daughter of Murrabbi Alhaj Mohamed G. M. Dhirani, the past Chairman of Africa Federation and the couple were blessed with a son, Minhaal and a daughter, Masooma.

“The office bearers of Africa Federation received the news of the death of our beloved brother and colleague, Alhaj Mohamedraza Khamis with great sadness. We were shocked with the sudden news more so as he was on a recovery curve from the Covid-19 virus he contracted while visiting Majunga.

Mohamedraza bhai was a man of wisdom and valour; serving humanity at large was his passion. His voluntary services spans for several decades dating back from his humble beginning in Morondava where he served initially as a volunteer and later as Chairman of Morondava Jamaat. This was the beginning of the long journey of the noble mission he dedicated in serving the Community and the less fortunate people during his lifetime.

For many years, he was the Head of Husseini Madrassah of Antananarivo Jamaat and Chairman of INISMA the institution established for propagating the Madh’ab of Ahlulbayt (AS) to the indigenous population. The establishment of the Centres, Madrassahs and Hawzas in several parts of Madagascar are the visible attributes of his lifetime vision and mission.

Mohamedraza bhai was acknowledged and honoured by the Chairman of Africa Federation and was bestowed with the Africa Federation prestigious Husseini Medal in February 2012. for his indelible and selfless services to the Community and in Tabligh.

I had the pleasure and opportunity to work and interact with him closely for many years, I wish to quote his famous and classic saying - “આપણા માં માટ ભેદ થાય પણ તેના લીધે માં ભેદ ના થવો જોઈએ – (meaning: That for sure, we will have our differences of opinion; but because of that we should not have bitter hearts – again meaning we should not become adversaries of each other!)”.

On behalf of my colleagues and myself we convey our heartfelt condolences to Marhum’s wife, children, brothers and all the family members on this irreplaceable loss and whose departure will leave behind a big vacuum in the family and in INISMA” – Shabir Najafi