Ithnasheri Dispensary – One of the historical landmarks in Stonetown – Zanzibar Island 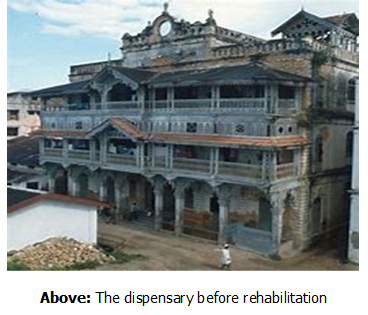 Brief history of the dispensary:

The Old Dispensary, also known as Ithnasheri Dispensary, is a historical building in Stone Town, Zanzibar. It is located on the seafront, in Mizingani Road, halfway between the Palace Museum and the harbour. It owes its name to the fact that it served as a dispensary in the first half of the 20th century.

The Dispensary is one of the most finely decorated buildings of Stone Town and a symbol of the multi-cultural architecture and heritage of the city. ]Its wooden carved balconies, with stained glass decorations, are of Indian influence; the main structure is built with traditional Zanzibari coral rag and limestone, but covered with stucco adornments of European neo-classical taste. The inside of the building is just as sophisticated, with a covered courtyard and carved bridges connecting the floors.

The Dispensary is one of Stone Town's major tourist attractions. It has a small museum about the history of Zanzibar. It was commissioned in 1887 by Tharia Topan, a prominent Khoja Ismaili Indian merchant and brought to completion in 1894. In 1900 the building was bought by a prominent Khoja Shia Ithnasheri Indian merchant, a member of Zanzibar Hujjat Jamaat, Hajji Nasser Noormohamed Kasmani who decided that the ground floor would be used as a dispensary, while the upper floors were partitioned into apartments.

In 1964, following the Zanzibar Revolution (whereby most Zanzibari Indians, including those who lived above the dispensary, left Zanzibar), the building was requisitioned by the government, and later fell into disuse and decay.

In 1990, as a part of a general plan for the renovation of the historical buildings of Stone Town, the Aga Khan Trust for Culture obtained from the Revolutionary Government of Zanzibar the permission to restore the Dispensary. This was completed in April 1994.

One of Zanzibar stone town’s main attractions is the old Khoja dispensary, now transformed into ‘Cultural Centre’. To us old timers it will always remain ‘Khoja Nasser Noormohamed Dispensary’. It was a huge complex and its considerable portion (its two storeys) allotted to tenants, and the rental proceeds from there used for running the dispensary. The two floors were occupied by Husain Raheem, Jaffer Rahim, Fazal Nasser Mawji and Yusuf Hasam Nasser. Incidentally my aunt, Mrs. Fatmabai Jaffer Ali Dungersi (Fatuma Dada) resided on the ground floor. Poor lady was restricted to her chair and bed. We had made it a point to go to see her every Sunday morning and also whilst paying visit to the dispensary. The ‘Cultural Centre’ photographs, so much in vogue today and reproduced in almost every tourist booklet, brochure or guide, therefore is bound to make us nostalgic.

The building located in one corner at the far end of a Malindi lane, and on the Forodhani/harbour road was built in 1899 by Khoja Tharia Topan (a prominent Khoja Ismaili) who parted ownership in 1901 by selling it to Khoja Nasser Noormohamed Kasmani (who had then been converted to the Ithnashri Sect). The building with its open roof terrace and ornate balconies and facade stood majestically in a row of other architectural masterpiece like Sultan’s Palace (now Peoples Palace) and Beit Al Ajaib along Forodhani or the Sea Front. It was believed that the building was specifically built to commemorate Queen Victoria’s Jubilee.

Sadly Nasser Noormohamed’s youthful son had died of severe illness and in his memory he donated this building as dispensary to the Khojas. The building thus came to be known as ‘Khoja Nasser Noormohamed Dispensary’ and both the Khoja Sects, Ithnashris as well as Ismailis, had access to it. However, Nasser Noormohamed being Ithnashri, the dispensary was under the trusteeship of Kuwwat and Hujjat Jamaats and patronized by the Ithnashris who frequented there for treatment. Those who had served there at one time or the other were Doctors Gulamhusain and Raza Khaku besides Goradia, Mehta, Patel, Awara, Oza and some others.

The dispensary’s administration is worthy of mention. Mohamedali Merali Rhemtulla and the bespectacled and pipe smoking Alimohamed Ahmed attentively peered through the thick register to check the patient’s name, and then delivered him his card selected from the pile of cards along with the number tag that had to be strictly adhered to. The doctor hardly injected. There was no testing of blood or monitoring of blood pressure (I doubt if the equipment existed then). The common prescription was ‘puri’ (powder) and white and coloured medicine. The ‘compounders’ Husain (Madawa) and Fida Mammu Molu would grind the tablets into ‘puri’, prepare the mixtures into medicine and label the doses on the bottle. The fever vanished within no time. They even handed a pack of ‘malam’ (ointment) if prescribed. The highly competent Hassani (the male nurse) had his small room at the far end of the dispensary. He applied yellow or red medicine on the cut or boil and then bandaged it up with his unique way of tightening a knot. The bandage had to be changed on regular bases when he would vigorously clean the wound.

Nasser Noormohamed was an extremely rich person and highly charitable. He was said to own a large number of houses in the Zanzibar stone town. Besides, he had his ‘shambas’ (countryside resorts) and a ‘pedhi’ (company) where his business dealings were executed. Khoja Hassam Alibhai was said to be one of Nasser Noormohamed’s close confidant. Nasser Noormohamed had also properties in Madagascar and Jamnagar. On my visit to Jamnagar in the 1960s I was taken to the Khoja Boarding House which had its wall adorned with huge portraits of Nasser Noormohamed, Jetha Ghokal and Jaffer Mohamed Sheriff.

It was unfortunate that after the 1964 Zanzibar Revolution, the Government by a Presidential Decree vested the trusteeship of all the Waqf property with the Waqf Commission. In any way, the Waqf Commission failed in its function to operate the dispensary. Later on the Government declared it as a historical monument worthy of preservation. It is intriguing that the Agakhan Cultural Centre succeeded in securing this building on lease basis from the Zanzibar Government and converting it into a full fledged ‘Cultural Centre’ while the Ithnashris despite their trusteeship in the past failed in their effort to rehabilitate it as a public dispensary.

Hajji Nasser Noormohamed Kasmani died in Zanzibar in the early 1900.