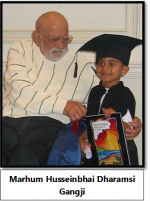 Marhum Hussein Dharamsi Gangji was born in Zanzibar on 12th August 1913 (23rd Shawwal 1335 AH). He lived in Zanzibar until the age of 51 and was in the business of growing and exporting cloves and coconuts. He was married to Marhuma Zainabbai Mohamedali Jaffer (daughter of Mulyani Kulsumbai Abdullah Khimji of Dar es Salaam). Husseinbhai and Zainabbai were blessed with 10 children: Rubab, Mohamedali, Abbas, Muhsin, Jaffer, Fatma, Banu, Raziya, Ali Akber and Sikina.

Marhum Husseinbhai was a philanthropist with a keen interest in education. Upon the death of his father, Alhaj Dharamsi Gangji, Husseinbhai embarked upon the construction of a school in Zanzibar’s Stone Town on Kiponda Road behind The Khoja Shia Ithna’asheri Mosque. Opened in February 1959 with teachers brought from India, the Dharamsi Gangji Ithna’asheri School was created to enhance the opportunity for secondary education on the island. In the late 1950s such opportunity was limited. Each year over 1200 boys and girls from Zanzibar and Pemba completed their Primary School studies and sat for a common entrance exam, but only the top 200 received spots in Zanzibar secondary schools. Husseinbhai felt deeply that this was unfair to the many bright students whose education was being cut short by these UK-style examinations, and this motivated him to provide an alternative opportunity. Every community child who had missed out in the common entrance exam was offered a place in the Dharamsi Gangji Ithna’asheri School. Every year, around 30 students were admitted, with any spare slots going to children outside the community. 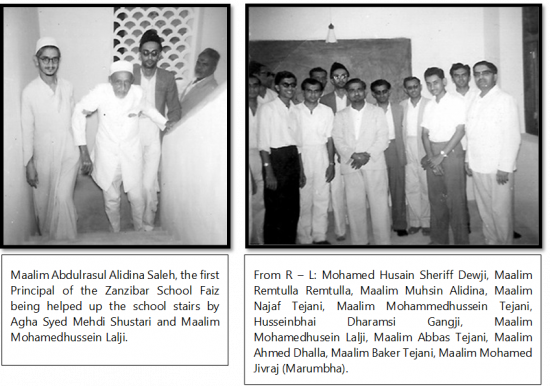 Classes at the Dharamsi Gangji Ithna’asheri School were taught in English, with Gujarati being offered as an academic subject. In the afternoons, the school’s premise was utilized by the community’s women’s organization for both vocational training and classes in spoken English for female students. In 1960 the School Faize moved its evening religious classes to the school. The school was thus evolving into a resource for the whole community. 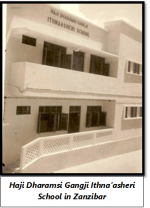 Marhum Husseinbhai had an abiding interest in quality education. Before his work on secondary education, he had started a nursery school in Kilima Miguu, Zanzibar, where he made sure that milk would be provided daily for the students. He would be at the bus stand every morning to ensure that the children were seated safely in the school bus. If a child was late, he would let the bus go but personally wait for the child and take him or her to school on his bicycle. He recruited Parinbai Nathoo and Rubabbai Alidina to teach at the nursery school.

After the 1964 revolution in Zanzibar, the running of the Dharamsi Gangji Ithna’asheri School was taken over by the Zanzibar Ministry of Education, and the name was changed to The Kiponda Secondary School and in the same year Marhum Husseinbhai decided to migrate with his family to Karachi, Pakistan. In 1980, during the UAE’s economic expansion, he moved to Dubai, and after two years decided to settle in London, UK. He resided there until 2007, when he moved to Bhavnagar, Gujarat, India. Wherever he moved he continued to assist the community in many ways, especially in matters of Education. During his years in London, Husseinbhai maintained a keen interest in the welfare and safety of the students at the Islamic Montessori School in Stanmore. In winter he would clear the snow up to the door of the school, so that the children could enter and leave safely. To honor him for his astounding services Huseinbhai was invited to present diplomas at the school’s graduation ceremony on Tuesday, 3rd July 2007.

On Saturday 15th December 2007, Husseinbhai, aged 94, arrived in Bhavnagar with his son Muhsin to settle in their new home, where he immediately took a keen interest in the running of the newly established Bhavnagar Mahdi School. Recognizing that the facilities for the nursery section at the Mahdi School could do with improvement, he donated the land and funded for the first two floors for a new state-of-the-art nursery school. In 2008 he was invited to participate in the launching of the Bhavnagar Husaini Education’s new website.

In 2011, Husseinbhai’s eldest son, Marhum Mohamedali Hussein Dharamsi made his first visit to Zanzibar after more than fifty years. Wanting to see the school that his father had built, he visited the Kiponda Secondary School and was shocked by the state of disrepair that it had sunk to since its building in 1959. It was obvious that the Government had not put any resources into the school’s upkeep. After building a rapport with the headmistress and the senior teachers at the school, Mohamedalibhai carried out a detailed survey of the structure of the building and initiated the process needed to bring the school and its facilities back to where he felt that it should be. He lined up a local contractor to oversee the renovation of the building and brought in a carpenter to work on the desks, shelves and other wooden items that were in dire need of repair. He also contracted a specialist to look into the possibility of digging a well to provide water for drinking, washing and flushing the toilets. Until then, water had been provided by a tanker that came at irregular times to fill a tank in the loft.

Despite the efforts of the headmistress, the scholastic level of the school was at that time very poor compared with other schools in Tanzania. The library was almost bare, with just a few outdated books. There was not a single computer, and the science lab had been converted into a storeroom. In a school that at the time was specialized in teaching languages, there were no aids for language learning! Mohamedalibhai realized that a tough road lay ahead, but he was confident that a positive change could occur with the support of his family.

Mohamedalibhai also concerned himself with the academic state of the school. He arranged for his friend, Terry Ward, an Educational Consultant from UK, to assess its scholastic achievements, and he met with the school’s senior teachers to discuss his findings. Back in England, at a meeting hosted by Rozinna Dharamsi (Husseinbhai’s granddaughter and Mohamedali’s niece), Terry Ward briefed the family educationalists including Tanvir (Mohamedali’s son), Rozinna and Husseinbhai’s daughter-in-law, Zainab Ali Akber’s wife), before drawing up an action plan to improve teaching and curriculum at the school. Even though the government operates the school, the family of Haji Hussein Dharamsi Gangji continues to support it financially. The funds they make available foster the quality of education which Husseinbhai had envisioned, by purchasing and maintaining equipment for the computer and science labs, buying books for the library, paying for advanced refresher courses for the teachers, and underwriting the building maintenance and other expenditures deemed necessary by the headmistress.

Over the last decade, the quality of education at Kiponda School has been progressively improving, and it is now quite high up in the ranking of secondary schools in Tanzania. This year, for example, all 61 students who sat the 2021 Tanzania National Examinations passed, and most are about to embark on further studies. Alhamdulillah, decades later, the nursery school in Kilimani and the Kiponda Secondary School are both serving the community and the children of Zanzibar. 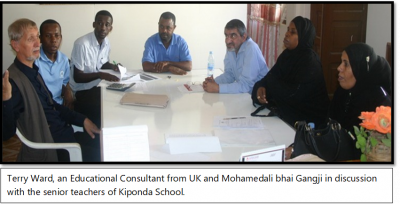 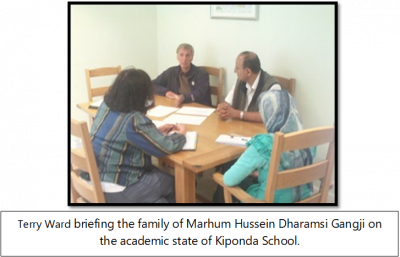 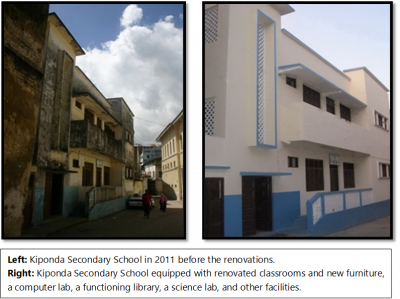 Africa Federation and the Archives Section of Africa Federation conveys their profound appreciation to the Dharamsi Gangji family for their devoted and philanthropic services to the community and society at large; especially in the field of education dating back to the 1950s in Zanzibar.