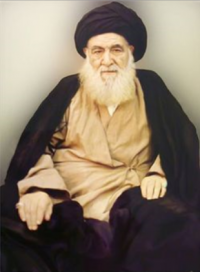 As-Sayyid Abul-Qasim al-Musavi al-Khoei was born in Rajab 15, 1317 AH - November 19, 1899 in Khuy – a city in the province of Azerbaijan Gharbi, Iran to a religious family. His linage reaches Imam Musa al-Kazim (‘a). His father, al-Sayyid Ali Akbar al-Khoei, was a great scholar and a student of Shaykh Abdullah Mamaqani. After finishing his studies, he returned to his home town and engaged in his cleric duties.

Life Journey As a Teacher & Scholar

As-Sayyid al-Khoei grew up in Iran. Around the age of 13, he moved to Iraq Najaf in 1330 AH -1912 and took up residence in the holy city of Najaf where he began studying Shia theology with the scholars of that city. He eventually attained the rank of Ayatullah and was subsequently made a Marja. As-Sayyid al-Khoei would continue to live in Najaf, becoming a teacher for the remainder of his life, and overseeing the studies of scholars who would be qualified to issue fatwas based on Shia theology.

Due to his prominent position as a teacher and scholar in Najaf, he became an important leader of worldwide Shias. He was made the most prominent Grand Ayatollah in 1971 after the death of Ayatullah As-Sayyid Muhsin al-Hakim. In this position, he became a patron of numerous institutions across the globe that sought to provide welfare, and also provided scholarships to theological students from across the Muslim world. He is considered as the architect of a distinct school of thought in the principles of jurisprudence and Islamic law, and one of the leading exponents of 'kalam'-scholastic theology- and 'rijal'- study of the biographies of transmitters of ahadith, the Prophetic traditions, 'fiqh'- jurisprudence- and 'tafseer'- exegesis of the Qur'an. His interests included astronomy, mathematics, and philosophy.

Educated in the established traditional way of Shia Theology by well-known jurists, he joined the world-renown theological institution in the holy city of Najaf Al-Ashraf in 1912, the year he migrated from Iran. At an early age, he attained the degree of ijtihad i.e. the process of arriving at judgements on points of religious law using reason and the principles of jurisprudence. This achievement normally warrants the title of ‘Ayatullah’. He taught in Najaf for over 70 years. For 50 years, he specialized in supervising post-graduate studies, most advanced among which is ‘Bahth-al-Kharij’ – Graduation Classes – equivalent to a Doctoral thesis. Successful candidates are qualified to practice ‘Ijtihad’.

He was a prolific writer in various disciplines. He wrote 37 books and treatises, most of which have been published.

• Lectures in the Principles of Jurisprudence – 10 volumes.

• Biographies of Narrators of Tradition – 24 volumes.

• Al-Bayan fi tafsir al-Qur’an (The Elucidation of the Exegesis of The Qur’an).

• Minhaju-us-Saliheen (The Path of the Righteous) – 2 volumes, reprinted 78 times (guide book on religious practice and law).

• Anthology of Religious Questions – Concise version of the Path of the Righteous – in Arabic, Urdu, Farsi, English, Turkish, Thai, Malay, Indonesian, and Gujarati.

• Ajwad-at-Taqrirat (The Best of Regulations) Principles of Jurisprudence.

• Nafahat-ul Ijaz (the Fragrance of Miracles), in defense of The Noble Qur’an.

After the Persian Gulf War, Khoei was arrested by Saddam Hussein during the mass Shia uprising that followed the defeat of Iraqi forces. While under arrest, he was taken to Baghdad and forced to make public appearances with Saddam Hussein. Saddam eventually allowed As-Sayyid Khoei to return to Najaf, but he was placed under house arrest. He died on 8 August 1992 – 8th Safar 1412 AH in Najaf at the age of 92. His funeral was led by his student As-Sayyid Ali al-Sistani. He was buried in Shrine of Imam Ali [‘a] in Najaf al-Ashraf. 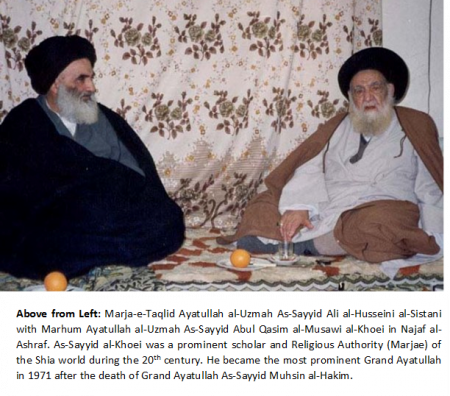 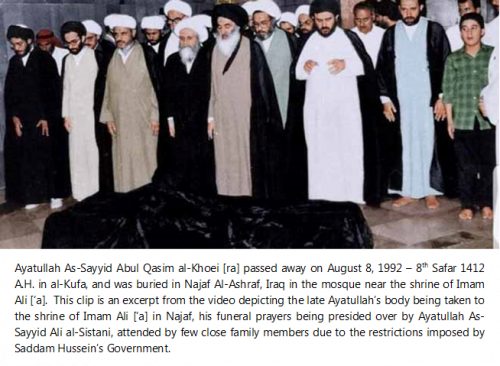