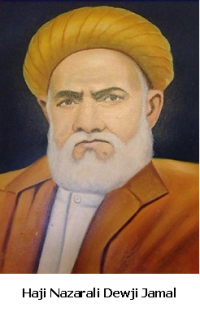 The founder of the Imambargha is Haji Nazarali Devji Jamal, one of the six sons of Dewji Jamal. He purchased the land in 1905 in the memory of his father. The original building was about 2,000 sq ft and was constructed by him and his brother in law Noor Mohammed Hemraj from their own funds. They also formed the 'KSI Imambargha and Kabrastan Trust' on 11th August 1921 and handed over the Imambargha property to this Trust for the general benefit of the Khoja Shia Ithnaasheri community.

Haji Nazarali Dewji Jamal passed away in Mumbai on 18th October 1930. He is buried in Kerbala in Wadi al Qadeem graveyard. (May Allah (SWT) grant him maghferat and elevate his status, Ameen) After his death, the property was being looked after by his son Mohammed Jaffer Nazarali Dewji followed by other family members and dedicated community members. In 1988 Br. Hamza Mohammedhussein Jaffer Dewji handed over the property to Mumbai Jamaat.

In 1981 Yusuf Ali Jaffer Panjwani along with Haji Roshanali Panjwani and Suleman Merchant laid the foundation of Jaffery Madressah at the Imambargha. At this point, they realized the need to redevelop the Imambargha and started the efforts in that direction. In 2009 with support from Safderbhai Karmali (President Mumbai Jamaat), Ali Akber Shroff (Vice-President, Mumbai Jamaat) and Riazbhai Datoo (London) the project was taken to the World Federation Executive Council for approval, this project was endorsed at the WF EXCO meeting held in Antananarivo, Madagascar. The Foundation stone laying ceremony of the Imambargha was held in August 2013 by Maulana Sayed Ahmed Ali Abedi Saheb who had been an encouraging figure at re-development of the project.

The President of World Federation, Dr Asgherali Moledina has guided and supported the project and it stands out as a capital project partnered with Mumbai Jamaat. Also, the support by Africa Federation and Alhaj Anwarali Dharamsi has been of great help in the project development. The new structure is Ground + 3 storeys covering a total of 20,000 sq ft and fully air-conditioned. It has a capacity for 1,200 people. 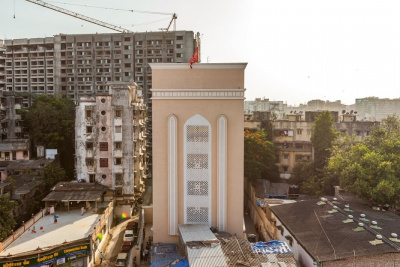 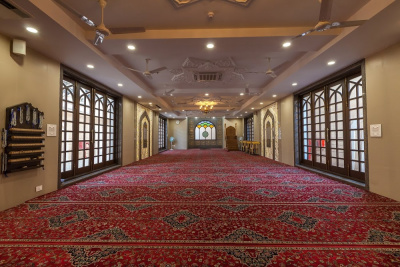 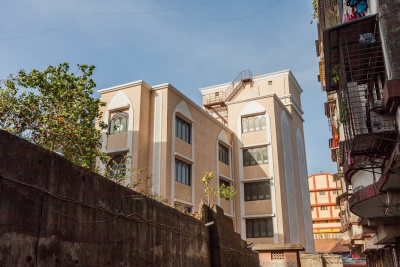 Dewji Jamal was born in Bhavnagar, Gujarat in 1820 in a rich mercantile family. He shifted his business to Bombay in 1850 and invested in properties and sailing dhows and eventually moved to Zanzibar in 1877, a small tropical island about twenty miles off the east coast of Africa. Dewji Jamal was an Ismaili and was known to pray namaz, fast and conduct majlis of Imam Hussain (as). He however also believed that Imam Ali was an Incarnation of Allah. In one of his visits to Karbala he met a high ranking Mujtahid who explained to him that this belief in Incarnation was incorrect.

Dewji Jamal understood that there were many such misconceptions and wrong beliefs and practices within his Ismaili community.H e requested that a learned scholar be sent to India to guide his community. Upon his request Mulla Qadir Hussein Saab was sent to India to educate the Ismaili Khojas with the true belief. This paved the way for introduction of Ithna-asheri beliefs among the Ismaili community. Haji Dewji Jamal is therefore considered to be one of the founding fathers of the Khoja Shia Ithna-asheri community. Haji Dewji Jamal was inspirational, visionary and instrumental who contributed tremendously towards building mosques, Imambarghas, cemeteries, Endowment Properties in India as well as at many places in East Africa, the first Mosque of Kuwwatul Islam was built in 1880 at Kiponda in stone town, Zanzibar and then the Imambargha. This Mosque is the first one of the Khoja Shia Ithna-asheris in the world. This and many other properties have served the community for over one century.

This was a landmark Capital Project under the dedicated leadership of the President of KSI Jamaat of Mumbai, Alhaj Safdar Karmali in association with The World Federation of K.S.I.M.C., U.K. The opening ceremony of Haji Nazarali Imambargha was held on Sunday, 20th March 2016 and was conducted by Dr. Asgharali Moledina, President of the World Federation. Also present was Alhaj Kumail Manji (Secretary General of the World Federation), Alhaj Anwarali Dharamsi, the Chairman of Africa Federation who was accompanied by Alhaj Aunali Khalfan (Hon Secretary) and Alhaj Mohamed Hemani (Hon Treasurer), and Alhaj Gulamali Virjee from Dubai, UAE. 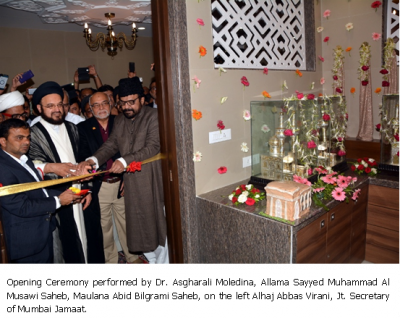 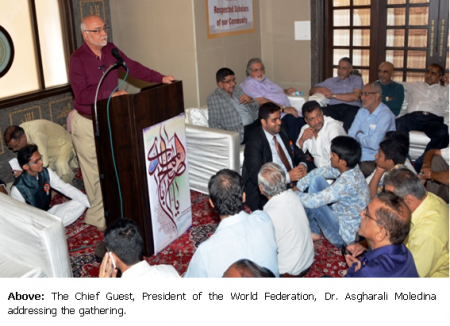 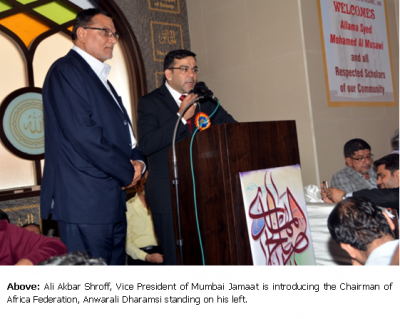 The original Imambargha was approx 2,000 sq ft which has now been completed into a Ground + 3 storey structure of 20,000 sq ft with gorgeous Halls, state of the art Audio Video facilities, separate staircase and elevators for Ladies & Gents and Air Conditioning on all floors. The Imambargha now has a seating capacity of 1,200 people.

The Chief Guest at the function was Dr. Asgharali Moledina, President of The World Federation, among other dignitaries present were Allama Sayyed Muhammad Al-Musawi Saheb, founder of WABIL and Maulana Abid Bilgrami Saheb presided over the program. The function was attended by several other dignitaries from Africa, UK, USA, Doha, Dubai and Presidents & Heads from several Jamaats and Institutions in India making the occasion a memorable one. The function commenced at 11.00 a.m. with recitation of verses of Holy Qur’an by Ali Raza Punjwani. The Vice President of KSI Jamaat of Mumbai Ali Akbar Shroff welcomed the Chief Guest & Dignitaries, he informed the august gathering that the original plan was to make Ground+2 and timeline set was of 32 months which during the course of time was changed to Ground+3 with part terrace and all of this has been completed in record time of 29 months which only reflects commitment and dedication of the Team Vision 2015 -2021 which was acknowledged with a loud Salawat.

Ali Shroff gave a brief insight on how Team Vision travelled this successful journey. He also spoke of his companionship with Br Jaffer Panjwani and the idea of Rs. 3,500/- a Sq ft donation campaign. Br. Mohamed Jaffer Panjwani gave a power point presentation of historical background and the sequence of the development of the project, up till the time of the opening. Dr Asgharali Moledina, President of the World Federation, expressed his satisfaction towards the quality of work and level of execution and assured his full support to KSI Jamaat of Mumbai and the India Federation in time to come.

Maulana Abid Bilgrami Saheb spoke on the importance of spiritual well-being of the community and stressed the importance of unity, cooperation and sustainability of our religious institutions. He emphasized on building strong foundation of our children in the secular and religious education given the period ahead shall be much more challenging. Allama Sayyed Mohammad Al-Musawi Saheb appreciated the team work of Mumbai Jamaat and expressed his desire to see an Imambargha in Bandra on same lines very soon InshaAllah, he pledged his full support, he said “Start the Project, and Allah (SWT) will guide you the way forward”. The Chairman of Africa Federation, Anwarali Dharamsi, during his address praised the youth of Mumbai specially Ali Shroff, Vice President of KSI Jamaat of Mumbai who is also the World Federation Councillor to have come forward with a team of dedicated youths and taken responsibility of this challenging community work, he also pledged US$10K towards the boys and girls Madressah at Haji Nazarali Imambargha. 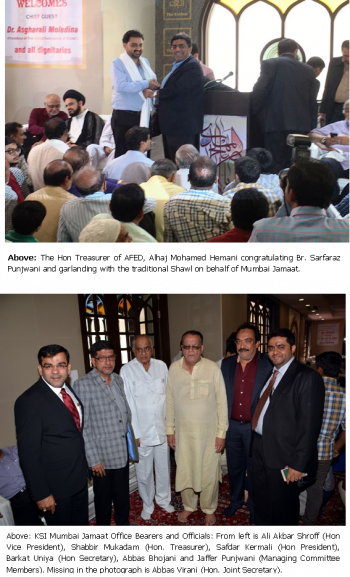 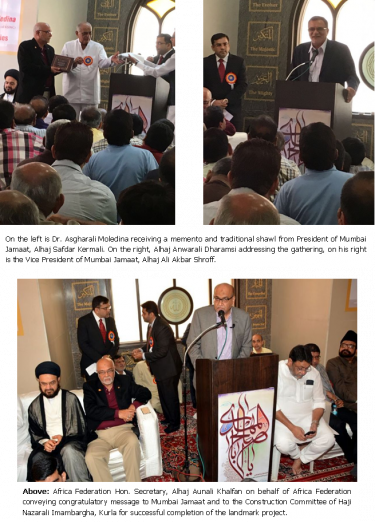 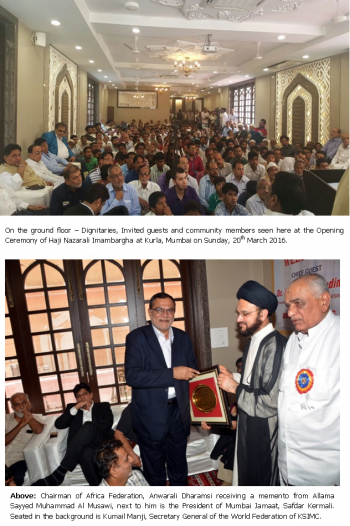 The program was well attended by over 1,500 people (ladies & gents) from various parts of Mumbai. Namaz was led by Allama Sayyed Al-Musawi Saheb followed by presentations of mementos, vote of thanks and Niyaz. Africa Federation and its Member Jamaats conveys heartiest congratulations to Mumbai Jamaat on this auspicious occasion of the grand opening of Haji Nazarali Imambargha in Kurla, Mumbai and commend the President of Mumbai Jamaat, Alhaj Safdar Kermali and his team for this great achievement. May Allah (SWT) increase in their tawfeeqt, grant them good health and long life to continue serving for the noble cause.