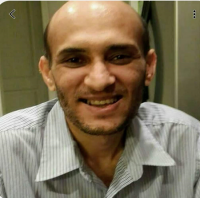 Jameel Yusuf Kermalli passed away in Orlando, Florida on 18th Jamadiul Awwal, 1441 A.H. corresponding to January 14, 2020. He is survived by his father Yusuf Kermalli, wife Suraiya, son Miqdad and daughter Zahra Kermalli. He was the younger brother of Marhum Mohamedraza Yusuf Kermalli. Jameel was born in Dar es Salaam, on 28th February, 1969 where he obtained his primary education at Olympio Primary School and secondary education at Shaaban Robert Secondary School.

At the Husseini Madressa Dar es Salaam, he had an outstanding performance and later became an exceptional teacher and a role model for many of his students. His piety, sincerity, humility and exceptional character is deeply remembered by all his fellow colleagues and students at the Madrassa.

In the sporting field, he excelled in cricket, like his father, the legend Yusuf Kabana and grandfather Gulamali Kabana of Zanzibar. In 1985, Br Abdulrazak Fazal of Dar es Salaam penned a famous tribute to Jameel which is reproduced at the end of this article.

From Dar es Salaam, Marhum Jameel traveled to the United Kingdom in 1993 where he graduated from the University of Southampton, U.K., with a Bachelor of Science (Hons.) degree in Psychology, majoring in Health Psychology. He got married in Dar es Salaam in 1994.

Marhum Jameel has authored three books - Concentration in Prayer – 25 Strategies to Develop and Maintain concentration in Prayer, plus a 30-Day Workbook and the second book was called - Islam, the Absolute Truth which discusses a close relationship between the progress of Science and the firmness of faith in Allah. The third book he compiled was ‘O You Who Believe’ which discusses the verses of the Holy Qur’an which begin with O’ You Who Believe! He also managed a foundation of his own called Zahra Foundation which published Islamic books, E-cards, Islamic puzzles, Board Games, Online Games, and Certificate courses.

One of the Board Games he prepared was The Hajj Board Game, resembling monopoly; it summarizes The Pilgrimage to The House of Allah, combining education, relaxation, and mystery.

Marhum Jameel moved to Orlando from New York towards the end of 2004 after the passing away of his mother. Later in Orlando, he developed a disabling condition but he continued helping others with his advice in the field of naturopathy and also writing Islamic books and creating games. He was a man of great patience and complete trust in Allah. He was never heard complaining about his condition. He left us an example of what a real servant of Allah should be like. May Allah grant him maghferat and rahmat and high status in Jannah, Ameen.

Just like Mohamed Azharuddin who sprang up from nowhere into the Indian team, the teenager Jameel Kermalli dominated the 1985-86 Tanzanian cricket season miraculously after remaining in the back seat for the whole of the previous season when he found himself promoted into the ‘A’ string from the ‘C’ division where his performance had been noticed. Jameel, born on 28th February, 1969 in Dar es Salaam, formed the 3rd progeny of the ‘KABANAS’ establishing the validity of ‘cricket is hereditary’. As a child he used to accompany his father to practices and matches and the urge to play in the game developed within him. Soon he started attending practices and would reach the ground as early as 3.00 pm. He owes a lot to Bashir Tejani and Amir Yusuf who encouraged him and furthered his career. Infact it was Bashir’s apt foresight that transformed Jameel into an off spinner. The striking aspect of Jameel is his batting which despite his lean physique produces wristy shots. He is a good cutter and most of his runs are scored through cover, square or slip regions. He is also a fine sweeper who can sweep the ball from outside the off stump anywhere between mid-wicket and finest of the fine leg as exhibited against Coast B last season in the semifinals of the Saturday Knockout when he struck such two consecutive boundaries which thrilled the spectators.

Jameel came into prominence on his first trip abroad in Zimbabwe in the 1985 AG Tarmohamed tournament where he got promoted in the batting line up and scored 30 invaluable runs against Malawi’s Mpingwe. In the following game against Zimbabwe’s Universal he scored 22 runs, claimed 3 wickets and took 2 catches that won him the ‘Man of the Match’ award. He created an impression upon the hosts who offered him a stay in Zimbabwe where he could be coached into a better cricketer but he let the offer go. Back home Jameel was made to open the innings and his prolific run scoring during the last season when he amassed more than 500 runs including 6 fifties is ample proof of his awesome batting ability. There was an amazing sequence of run making that did not seem to diminish as at one stage he had four 50s in a row. One of his fine innings was played against Dar Gymkhana when he took the sting out of its bowlers scoring 73 fluent runs and it was only lack of concentration on his part that got him out. He often tends to play such wild shots which of late seem to have given his batting a bit of decline.

Against a strong ‘Giants International’ side from India he scored 35 including a six and took 4 wickets for the Tanzanian side that won him the ‘Man of the Match’ award and lots of acclaim from the visitors. Jameel thus gained a lot of attraction and instantly got into the national side that toured Malawi for the Quadrangular tournament. He proved it to the hilt by becoming Tanzania’s highest wicket taker with 6 wickets. In the following Quadrangular played at Dar es Salaam Jameel repeated the feat. Besides his haul of 4 wickets with his off breaks Jameel proved an exciting and fluent stroke maker willing to take any chance. Runs piled up as he came to bat. With a batting average of 75 he put up the finest all round performance for Tanzania.

Today Jameel is one of Tanzania’s leading all rounder who is often among the wickets and runs. He forms a formidable partnership with the leg spinner Sajjad Lakha that is deadly enough to keep the batsmen under control. With a little longer run up he bowls his spins at a quick pace. On a turning wicket he gets big turns that the batsmen tend to play down the wrong line and get their stumps knocked off. In a recent league game, he spun EKTA to its doom by clean bowling 4 of its batsmen and paving the way for Union’s victory. Jameel is also a fine fielder in any position. Indeed, his all round ability has given Union Sports Club of Dar es Salaam a big boost. Jameel, like his father Yusuf, is deeply religious and while off the field would not hesitate to spread his musallah and offer namaz at the prayer time.

On behalf of Africa Federation Secretariat, Office Bearers, Trustees, Councillors and AFED Archives Section, we extend our heartfelt condolences to Alhaj Yusuf Kermalli (Kabana), family members of late Jameel Kermalli, all relatives and Ithna-Asheri Union and Union Sports Club members and friends on this great loss of Jameel to the family and to the community. 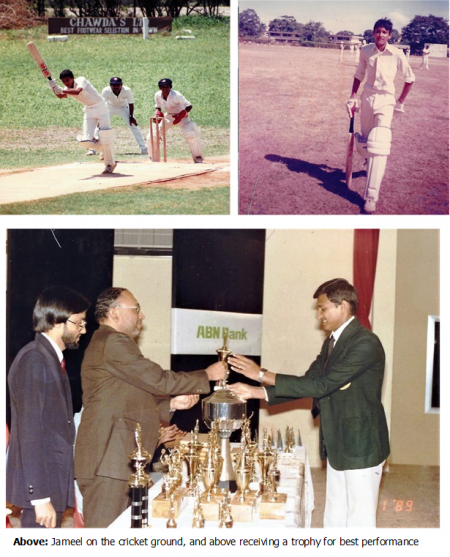 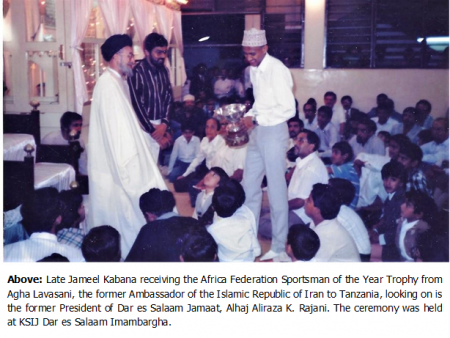