It is with deep sadness that the Africa Federation Secretariat received the news of the demise of Alhaj Mulla Hassan Ali Redha Nathani who passed away in Dubai, U.A.E on Saturday 4th June and was buried there on Sunday 5th June 2022. 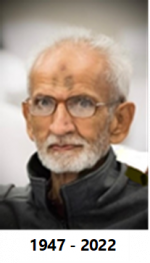 Marhum was the son of Marhum Mulla Alireza Nathani and Marhuma Muliyani Zahra bai Nathani, both lived in Zanzibar, Dar es Salaam, and later in Dubai. They dedicated their services in the Azadari of Seyyedu Shohada, Aba Abdillahil Hussain (‘a).

Marhum Mulla Hassan had many special qualities that all can resonate with; a regular attendee at all programs and a lover of Ahlulbayt (‘a) with a firm belief in holding Majalis Aza, Azadari, Shabe dari especially arranging youths to serve Sabil throughout Ashura night at different venues, distributing Niyaaz and always ahead in Kafan Dafan rituals. He served the Dubai Managing Committee in various roles and especially played an active role in the Tabut Committee. Marhum also led our community for visitation to esteemed locals’ homes for Quran Khani during Mahe Ramadhan. In the early days, he used to manage the Qabrastaan ensuring Majalises were held and Nyaz distribution. He then became a regular at reciting Majalis in Qabrastaan as well as reciting Majalises at the Imambargah in the past few years.

Marhum Hassan Nathani was one of the founder members of IUVC (Ithna-Asheri Union Volunteers Corp) in Dar es Salaam in the year 1971/1972. Amongst the founder members was also Alhaj Aunali Khalfan, the current Vice Chairman of Africa Federation. Aunali bhai narrates that Marhum Hassan Nathani was a dedicated and devoted volunteer, he would be the last person to eat nyaz after seeing that all the people have been served with nyaz and the volunteers too. He would serve Sabil in the Imambargha upto the end, during those days people would seat in rows facing each other and between two people one thali of Nyaz was provided, it was not self-service like these days. 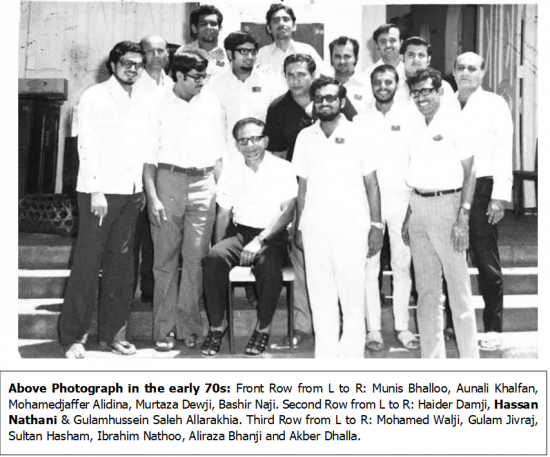