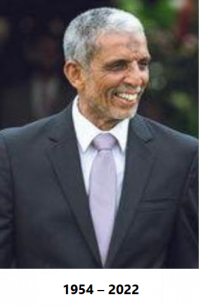 The Africa Federation Secretariat and Bilal Muslim Mission of Tanzania received with deep sadness the news of the demise of Alhaj Mohamed Jaffer Haji Ali Chandoo, who was also popularly known by the name of Mamadi. He passed away while undergoing medical treatment in the hospital in Los Angeles, California on Wednesday, March 30th 2022 (27th Shab’an 1443 A.H). His funeral took place on Friday 1st April 2022 in Los Angeles, CA, USA.

Alhaj Mohamed Chandoo was born in Zanzibar on 5th October 1954. After completing his secondary education, he moved to Tanga in mainland Tanzania in 1970 along with his parents and siblings. Mamadi’s late father Haji Jaffer Ali Chandoo was a good reciter of Nauhas, especially the Saf Matam, he was also a renowned Chef for traditional food and used to cook Nyaz in Zanzibar, later in Dar es Salaam and Tanga for the Jamaats. He passed away in Tanga and was buried there.

Late Mamadi got married in 1976 in Tanga to Sis. Naseem daughter of Akberali Gulamali Khakoo a resident of Tanga and are blessed with seven children and grandchildren. Marhum was a keen sportsman, active social worker and a successful businessman, he had a shop located in the busy street of Tanga along Swahili Street dealing in building materials, sanitary ware and electrical items etc.

Marhum was a dedicated, caring and humble person, always willing to assist his colleagues, neighbors and family members. For many years, he served in Bilal Muslim Mission of Tanzania in Tanga and held the position of Vice Chairman of Bilal Tanga Branch, the position he held up to the time of his death. He travelled frequently to many villages in Tanga visiting the Bilal Centres to observe progress of the Tabligh work and holding meetings with the Ma’alims (teachers), staff and students.

Below is the message from Bilal Muslim Mission of Tanzania Chairman, Alhaj Hussein A. Karim:

“Marhum Mohamed Jaffer Haji Ali Chandoo (Mamadi as he was famously known) was a well-known personality in Tanga where he played an active role in External Tabligh work, under Bilal Muslim Mission, Tanga Branch holding the position of Vice-Chairman until he bade farewell from this temporary world on 30th March 2022 in Los Angeles, CA in USA where he was undergoing medical treatment.

Marhum was a devoted and caring person, his foresight, selfless services and wise counsel will be missed by the institution and by his family too.

I convey on behalf of Bilal Muslim Mission of Tanzania and on behalf of his colleagues in Bilal Tanga Branch our heartfelt condolences to his wife, children and grandchildren on this huge loss in the family. May Allah (SWT) grant him maghferat and give the family patience to bear this irreplaceable loss, Aameen.”

The passing away of Alhaj Mohamed Jaffer Haji Ali Chandoo is a big loss to the family and to Bilal Muslim Mission of Tanzania and particularly, Bilal Tanga Branch where he served as a volunteer holding the position of Vice-Chairman till his death. We pray to Allah (SWT) to grant him maghferat and place him in the closest proximity of Ahlulbayt (‘A) where he continuously receives the mercy and grace of Allah (SWT). We extend our heartfelt condolences to his wife Naseem Bai, his sons Muntazir Ali, Sameer and Mujahid, daughters Kulsum, Sakina, Fatema, Badriya, and his grandchildren.