Formation of Mehfil-e-Asghari (as) & Programs during Muharram

Mehfil-e-Asghari was formed in the 1950s in tribute to the sacrifice of Hazrat Ali Asgher (as), the youngest martyr in Karbala and also as a nurturing ground for the youngsters who are the future leaders of our community. In the 1950s during the month of Muharram, the youngsters of Dar es Salaam would gather at the house of Late Abdulhussein Jusab Sachedina famously known as ‘Azaad’ located on Libya Street. This Majlis of Imam Hussein (as) was conducted under the supervision of Dr. Aziz Sachedina and his devoted mother Marhuma Hamida bai (Bawlo). As the attendance of the majlis grew, a small room in a mud house along Band Street (currently Safari Inn) was rented for TZ Shillings 100 per month, which was paid by Mrs. Kulsum bai Abdulla Khimjee. The Azaakhaana was named ‘MEHFIL-E-ASGHARI’.

In the 1960s, the small structure was pulled down and a 4-storey building was built by the Alibhai family in which a small unit on the ground floor was dedicated for Mehfil-e- Asghari. The Mehfil expanded from a small space of 50 Sq. ft to 600 Sq. ft in a new building in 1970s.During the expansion of the Mehfil, Marhum Hussein Nasser Walji (former President of Dar es Salaam Jamaat) played a vital role in its establishment. Additionally, Dr. Sachedina and his late mother Hamida bai with the support and assistance of the family members of Amarshi Alibhai Kurji worked tirelessly against the odds during its teething period. Together with that, Marhum Rajabali Amarshi Alibhai played a stalwart role in shaping the Mehfil to its present form.

In the years between 1950 – 1960, the Majaalis-e-Hussein (a’) and Ashura procession began. The Majaalis were organized in the evenings in Muharram for young boys recited by Mulla Aziz. Furthermore, in 1960s, the majaalis at Mehfil-e-Asghari were specifically catered for in Gujarati so that children could understand. The programs for girls began in 1980s and the founders were Fatma bai Rajwani, Batul bai Jaffer and Batul bai Walji assisted by Rubab bai Dawood and Fatmabai Bhojani. Nizar Kassam of Valji & Allibhai and Mr. Rajabali Alibhai conducted initial negotiations with the Traffic Police Authorities and procured a permit to organize Ashura Night Juloos every year. On the eve of Ashura, a procession mainly of community members moved solemnly from the Mehfil through Libya Street to the Post Office and proceeded to Mehfil-e- Abbas (a’) strolling on the footpath carrying replicas and reciting marshias and nawhas. 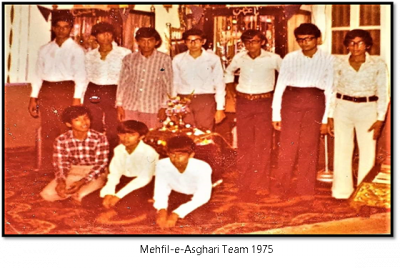 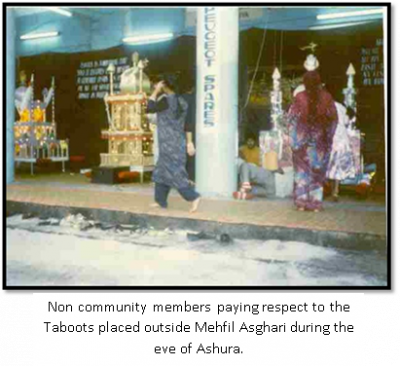 Mehfil-e-Asghari is now under the Khoja Shia Ithna’asheri Jamaat of Dar es Salaam and moved to the second floor of Mehfil-e-Abbas in 2009. The Mehfil has its majaalis for boys every Tuesdays and for girls on Sundays. The programs include lectures from community scholars and Mehfil volunteers, Majaalis during Wafaat and Khushali, arts and crafts, games and other fun learning activities.


PROGRAMS IN MEHFIIL ASGHARI FOR BOYS DURING MUHARRAM

PROGRAMS IN MEHFIIL ASGHARI FOR GIRLS DURING MUHARRAM

Mehfil-e-Asghari has organized various events over the years. The following are some of the notable ones:

• Mehfil-e-Asghari annual football tournament for boys for all its participants and volunteers and various field trips like visits to the orphanage organized for girls.

• Mehfil-e-Asghari has its annual Hajj demonstration program in collaboration with the Development Society of Husayni Madrasah during the month of Dhul-hijjah.

• On the 15th of Shabaan, Mehfil Asghari has its grand celebration to mark the birth anniversary of our beloved 12th Imam (a.t.f.s) which included parades and dramas.

• On the 27th of Rajab, the Mehfil has its annual Iftaar program organized for boys.

• The Mehfil conducts the Brain of Mehfil tournament annually and topics include Math, Islamic studies, sports and general knowledge.

• Baligha program for girls which was initiated in 2020. 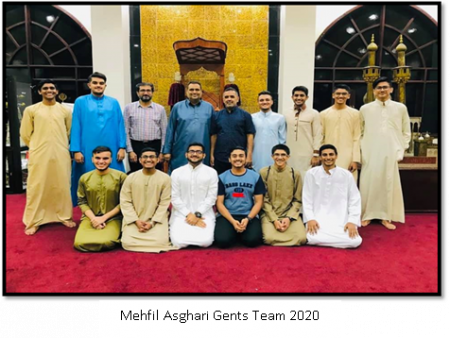 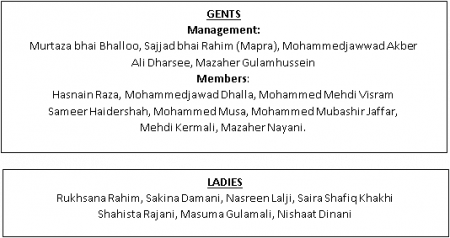 This institution of the young martyr of Karbala has produced many reciters who are currently all over the world and we pray it continues to do so in the future Insha’Allah. We pray to the Almighty to grant all the current volunteers good health and tawfiq to continue to serve Mehfil-e-Asghari.