The Africa Federation (AFED) Secretariat received with deep sorrow and sadness the news of the sudden death of Alhaj Dr. Naushad Noorali Merali of Sameer Group of Companies which occurred in Nairobi on Saturday 3rd July 2021. He was buried same day at the Shia Asna Ashri Jamaat Cemetery in Nairobi. 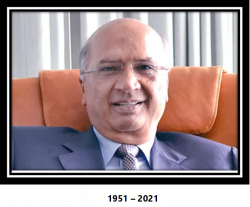 Naushad bhai was born on 2nd January 1951 in Mombasa, Kenya, he was amongst the six siblings blessed to his parents Laila bai and Noorali bhai (well known as Bapa).

A well-known personality in Kenya as well as beyond the borders of Kenya for his philanthropic activities, within and outside the community. His life was a manifestation of a humble beginning, augmented with hard work, foresight and strategic planning that enabled him to become one of the renowned businessmen, industrialist and philanthropist whose love and compassion for the community was immense. He supported wholeheartedly many projects, his contributions to the poor and underprivileged members of the local and other communities has been remarkable. He together with his wife Zarin bai founded the Zarina and Naushad Merali Foundation for philanthropic support of several projects that include hospitals, health centres, old-age homes and education for the needy.

Naushad bhai was the Chairman and founder of Sameer Group of Companies a leading multinational in Kenya, other companies that he founded are Ryce Motors and Kencell. He served on various Presidential Committees relating to trade and social services and was a member of the National Economic and Social Council. He is a Board Trustee Member of the National Cancer Institute of Kenya. In recognition of his contributions to the development and economic growth of Kenya, Dr. Merali was honored with the prestigious Elder of the Burning Spear (EBS) in 2001 by the then President of Kenya Late Daniel Arab Moi and the Chief of the Order of the Burning Spear (CBS) for his philanthropic efforts in Kenya. He was also awarded a doctorate degree (Honoris Causa) in Business Leadership by Kabarak University in 2015.

Naushad bhai’s contribution towards the Community has been immense, he has contributed towards many projects undertaken by our Jamaats in Africa, which includes the Africa Federation Al Qa’eem Housing Project in Arusha, he was also one of the major sponsors of the Sports Festivals organized biennially by Africa Federation. The Jaffery Islamic Centre (JIC) in Lavington, Nairobi and JIC in Mombasa benefitted greatly from his generous contributions. He also funded 50% of the new development of the Jaffery Sports Club – the sports ground and the new pavilion is a clear reflection of his commitment which stands high at JIC in Mombasa. A road in a high end of Nairobi estate was named after Marhum. The Naushad Merali Drive, located in Lavington, Nairobi, the area where the Jaffery Complex is located. 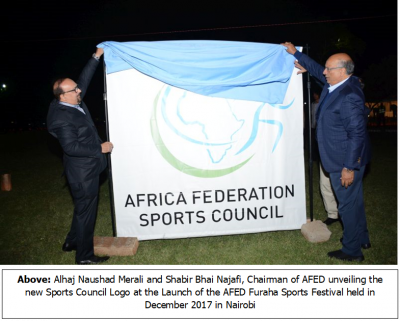 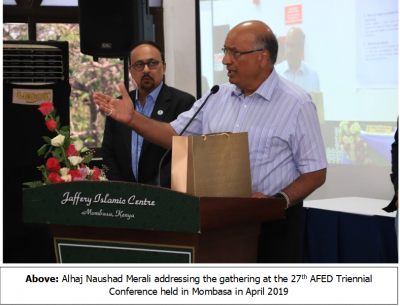 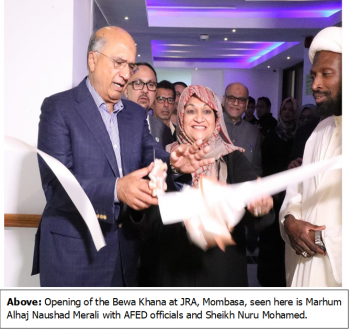 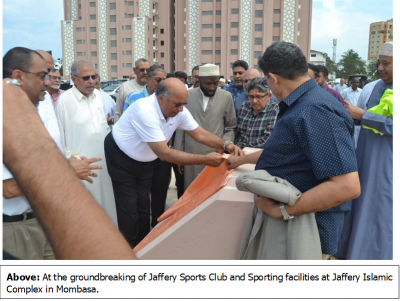 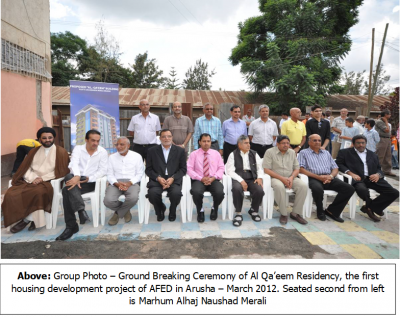 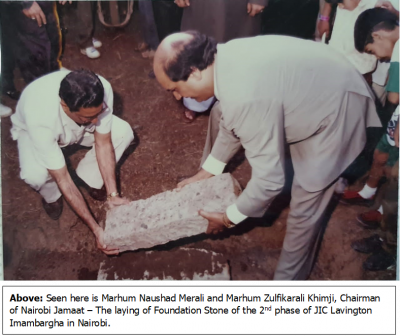 Tribute from the Chairman of Africa Federation

Extract of the Condolence Message to the family of Marhum Alhaj Naushad Merali from the Chairman of Africa Federation:

“The Africa Federation Office Bearers received with great sorrow the sad news of the demise of Alhaj Naushad bhai in Nairobi which occurred on Saturday 3rd July 2021. Naushad bhai’s sudden death has been received with profound shock in our Jamaats and in many parts of the world. Marhum was a humble and kind-hearted person whose thoughts and actions were always focused towards the betterment of the Community. His contributions in numerous projects in Africa and overseas are vast, they bear testimonies of his philanthropic mission. He strongly believed in Islamic tradition and noble act of giving quietly towards charities, which will Insha’allah be the source of Marhum’s salvation and divine reward by Allah (s.w.t.), The Most Beneficent, The Most Merciful, in the hereafter.

We shall deeply miss his wise counsel whenever a need arose to consult him on Community matters and development. On behalf of my colleagues and myself, I am writing this letter to express our grief and deep sympathies to you all on this bereavement, which has fallen upon you”.

We convey our heartfelt condolences to Marhum’s wife Zarin bai, son Sameer, daughter Yasmin, his siblings and all family members.