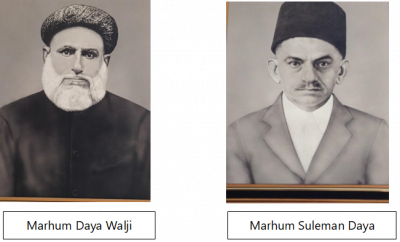 The history of the Daya Walji family, traced from the few available archives and from verbal narrations by his children, grandchildren and great grandchildren dates back to the 1900s. Marhum Daya bhai Walji, one of the oldest pioneers and pillars of the community and his son Marhum Murrabi Suleman bhai Daya arrived in Tanzania when the son was very young. Suleman bhai was in business with his father and while being involved in a prospering family business, Suleman bhai gave voluntary services to Dar es Salaam Jamaat by serving as secretary and trustee for some years during which he physically, whole-heartedly and financially struggled for the betterment of the Jamaat. His tireless efforts and financial contribution led to the success of the Jamaat in many spheres.

Suleman Daya was a strong believer in educating future generations. He donated to the Jamaat prime real estate during his life including the plot across the Aga Khan Hospital where the rental income once financed an annual meal at the mosque. This plot and the adjacent plot were subsequently donated by his descendants to Dar es Salaam Jamaat for education purpose. This is where the Al Muntazir Boys Primary School now stands. Up to the fourth generation of the Marhum Daya Walji family lived in a house on this Sea View plot.

In 1937, both Daya Walji and Suleman Daya donated a building described by archives as ‘magnificent’ to be used as a Madressah. This is well known as the Daya Walji Madressah where Husseini Madressah conducted its classes. In addition to the Madressah building, they donated the adjoining two-storey flats to generate rental income to finance the administrative and operating costs of the Madressah.

The Jamaat gave a miniature engraved treasure chest to Daya Walji as a token of appreciation. This is presently with his great grandson Munir Daya.

The construction of the proposed Madressah began at a slow pace. It is reported that, to expedite work, Daya Walji started a hunger strike that led to a quick implementation of the project. Daya bhai passed away and was buried in Dar es Salaam in 1950 while his son Suleman passed away when on a Ziyarat trip on 21st June, 1945 (15th Rajab, 1364) and was buried in Jamnagar. 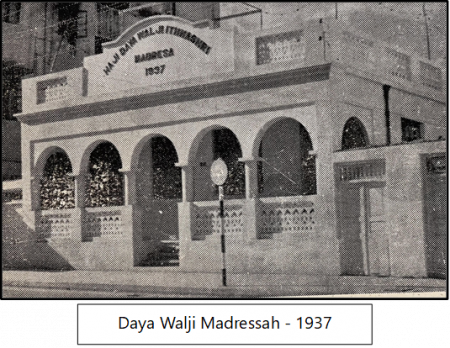 During the 1960s, the rear portion of the Madressah was occupied by Maulana Aqa Haider Saheb. In the 1980s, it was used as the Principal’s office of the newly established Al Muntazir School which started in this building. In the evenings it served as the office of the Principal of Husseini Society later renamed Husseini Madressah.

During the Presidency of Marhum Nurmohamed Nasser (1952-60), Dar es Salaam Jamaat had a small office room located in Kanji Damani Trust Building opposite the mosque. This room was then allocated for use by Mukhi Gulamhusein Manek who helped members of the Jamaat in complying with new statutory requirements for registration of Tanzanian citizenship. The Jamaat office was moved to the Daya Walji Madressah building and occupied almost half of the Madressah building while the other half continued to be used as a Madressah for boys.

In the 1960s, Allama Sayyid Saeed Akhtar Rizvi was in charge of the overall Madressah classes which were held in three different premises: for boys, at Daya Walji building, girls and younger boys at the now Ebrahim Haji Dispensary premises and the building opposite the dispensary (known as Esmail Alibhai Trust Building - which later housed the Jamat office. The Union Nursery also had its first classes at this premises.

When Sayyid Allama S Akhtar Rizvi was in charge, the Madressah was held every afternoon. He followed the syllabus prepared by the Supreme Council. The students sat for common central examinations prepared by the Africa Federation. Apart from afternoon Madressah, the Husseini Society provided training for boys in Namaaz and Dinyat during Maghribain. Boys therefore had two religious classes to attend daily.

In the 1960s, the government introduced once a week religious classes in primary and secondary Schools. Allama Rizvi prepared Dinyat books in English - called “Elements of Islamic Studies' ' to be used at schools. The books gradually replaced the former Gujarati Dinyat books by Marhum Mohammedjaffer Sheriff Dewji, parts 1-3 which were common in all our madaris in the 1950s.