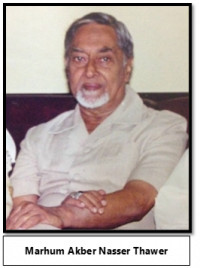 Community Members living in Dar es Salaam during the 1980s and 90s will certainly remember Marhum Akber Thawer as a hardworking, soft-spoken and highly helpful individual within the Dar es Salaam Jamaat operations and administration. Marhum Akber Bhai was born in Zanzibar on 24th September 1924 to Nasser Thawer Khalfan Damani and Sherbanu bai Mitha Teja. He thrived academically excelling in Upper Middle Schools Leaving Certificate Examination with Distinction in English in 1939. In 1940, he joined the Government Secondary School and in 1943, passed the London Chamber of Commerce Examinations for shorthand and Typewriting. He then joined as a Stenographer in the Administration Section of the Economic Control Board in 1950.

In 1954, he resigned from the Economic Control Board and joined Karimjee Jivanjee & Co. Ltd in Zanzibar being in charge of various sections such as Caltex Agency, Michelin Tyres, and General Trading Dept. During this time, Akber Bhai also taught Farsi at the night classes in School Faize in Zanzibar. He was also the Founder Member of Kilimani Nursery School and was on Education Board with Datoo Hemani Girls School in Zanzibar. In 1963, Akber Bhai was promoted as the Manager of the firm and in 1969 he was transferred to Tanga as the Branch Manager of Karimjee Jivanjee & Co. Ltd. In Tanga, he taught at Muhammadi Cultural Group (MCG) and also served as the Honorary Secretary of KSI Jamaat of Tanga. In 1971, he was employed as the Manager in Jamhuri Sisal Estates managing Tongoni and Marangu Estates in Tanga. In 1974, he was appointed as the Director of the Company which entailed him to pay monthly visits to Dolly Sisal Estates in Arusha and attend monthly Directors meetings in his capacity as the Director cum Secretary until 1976. In 1977, upon migration of Marhum Hassanali Bhai Pirbhai to Vancouver, he was promoted to replace him as the Managing Director, a post which he held until his resignation in 1978 consequent upon the disposal of the estates to a Greek Sisal Company.

He was also a Zakir-e-Hussein reciting majlis in Kabrastan and calling out Fajr Azaan every Wednesday in Dar es Salaam. From 1990 until his retirement in December 2011 he served as the Dar es Salaam Jamaat Administrative Secretary.

He was awarded a recognition certificate for rendering excellent services as the Office Administrator of the Dar es Salaam Jamaat during the tenure of the Presidency of Alhaj Anwarali Dharamsi in November 2005. In December 2010, Akber Bhai was presented with a Token of Long Services for his 20 years of dedicated services to the Jamaat Secretariat. In November 2004, he was awarded a certificate of appreciation by the Ex-Somalia Community appreciating his services and dedication towards the settlement of the Community from Somalia, Akber Bhai was one among those who assisted the Africa Federation in the overall settlement of the Somalia Community in East Africa in the early 1990s.

On Thursday 25th August 2016, this humble community worker bade farewell to this temporal world and made his passage to his permanent abode. Akber Bhai is survived by three sons – Shokat, Liyakat, and Jameel, one daughter Fatma and 15 grandchildren and 17 great-grandchildren. He lost two daughters Shamim and Hamida and two wives during his lifetime.

“My association with Marhum Akber Bhai Nasser Thawer goes back to many years, he was one person that I admired for his efficiency and dedication towards his duties. I was then a member of the Managing Committee of Dar es Salaam Jamaat and a Volunteer of IUVC when I came to know Akber Bhai much more for his diligence work as an Office Administrator of Dar es Salaam Jamaat. In the late 1980s, as I was then heading the Ashoora Juloos Ad-Hoc Committee which I did for almost 20 years, and working closely with Marhum Akber Bhai I observed some fascinating things. One that I wish to share is about the level of passion he had at the time there were no such gadgets like computers, scanners, etc. while helping to type letters and circulars using the Olympus Typewriter and the Xerox Cyclostyling Machine on which stencils were made. The margin for errors had to be minimum as there were no such things as “cut & paste or delete etc”. Correcting fluid was used for any corrections and retyping of stencils. In all that time-consuming work and working beyond the office hours, Akber Bhai would respond with a soft reply and a smile on his face, he was a humble and passionate person who loved his community very much. His humility and hard work even during his advanced age are worthy of emulation by the community at large. His meritorious contribution shall always be cherished and he will always be remembered for his dedication”. 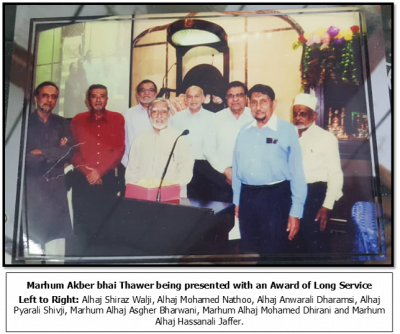 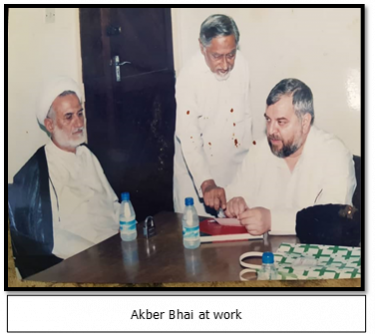